James Earl “Jimmy” Carter, Jr. is an American politician who served as the 39th President of the United States, he is perhaps on of the few outspoken president of the time, going against the public opinions on gay marriages and race discrimination. From a young age, Carter showed a deep commitment to Christianity, surprisingly he is not a Republican.

Love him, hate him, we have to admit that he chose not to attack the Iran military during the hostage crisis. America can easily win the war with Iran, but the death toll will be enormous. Looking back, he made the right choice. President Jimmy Carter stands for: 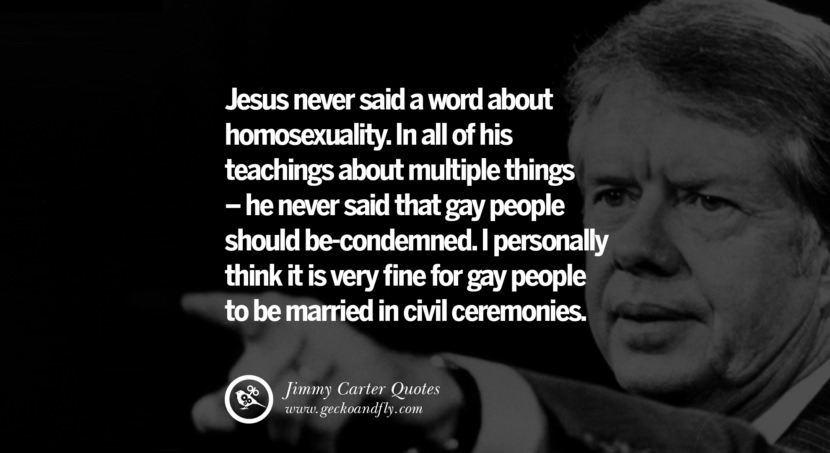 Jesus never said a word about homosexuality. In all of his teachings about multiple things – he never said that gay people should be-condemned. I personally think it is very fine for gay people to be married in civil ceremonies. – Jimmy Carter 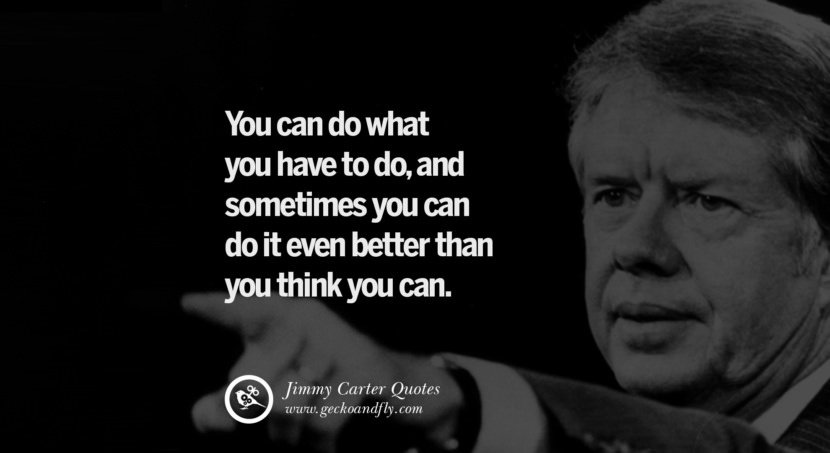 You can do what you have to do, and sometimes you can do it even better than you think you can. – Jimmy Carter 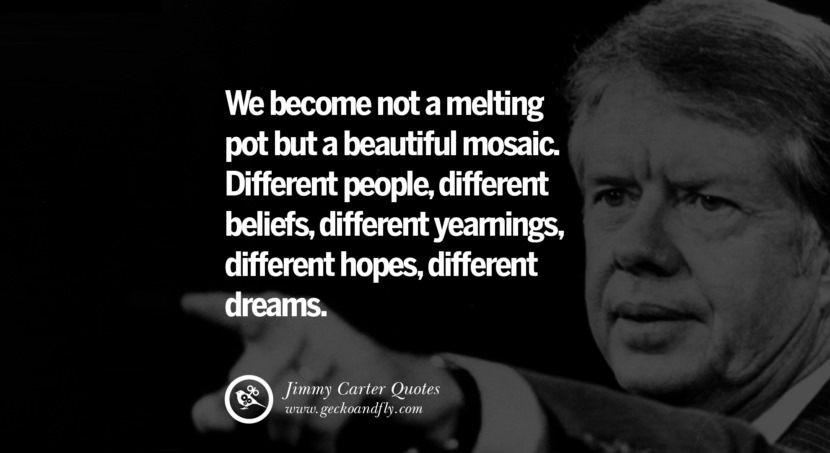 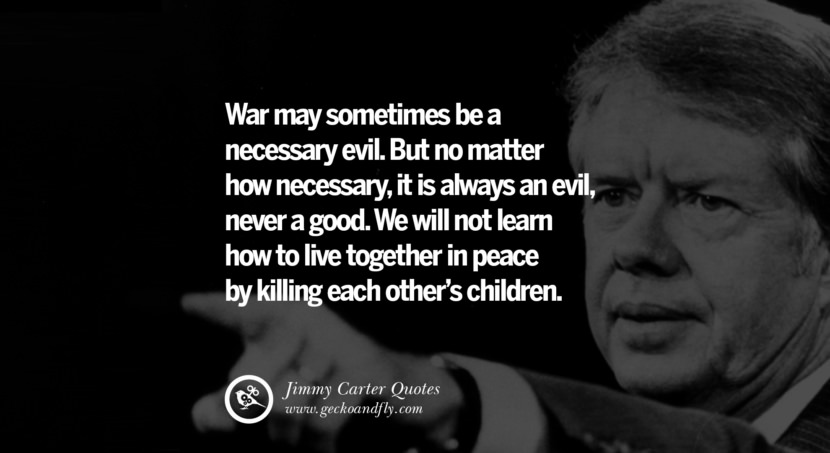 War may sometimes be a necessary evil. But no matter how necessary, it is always an evil, never a good. We will not learn how to live together in peace by killing each other’s children. – Jimmy Carter 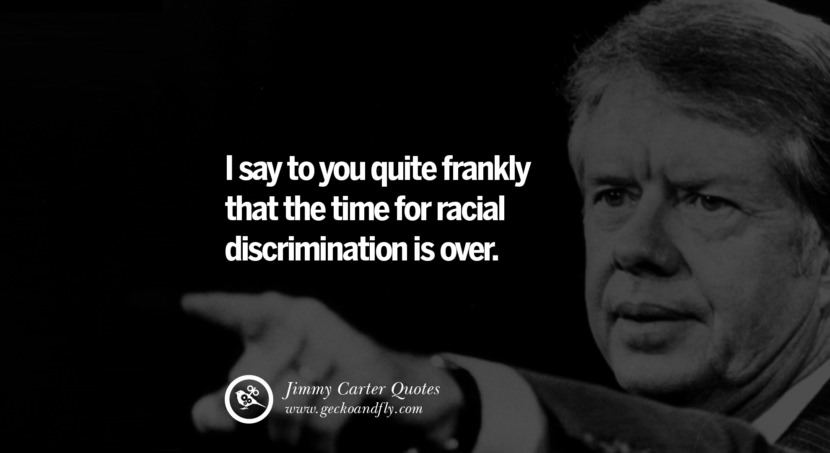 I say to you quite frankly that the time for racial discrimination is over. – Jimmy Carter 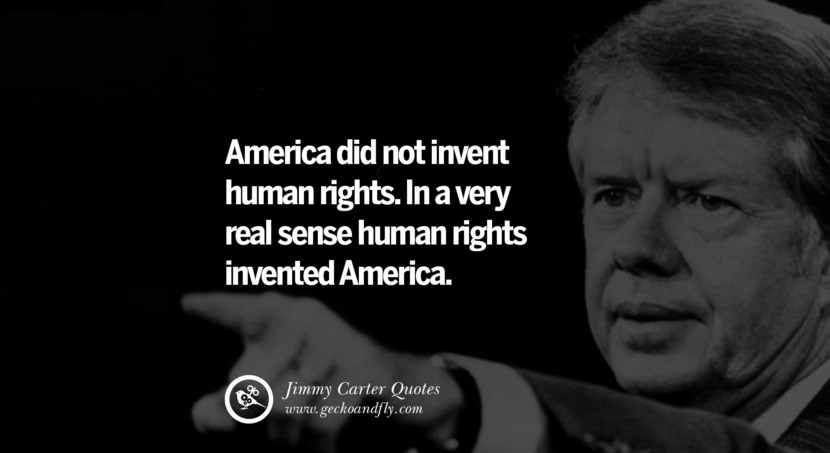 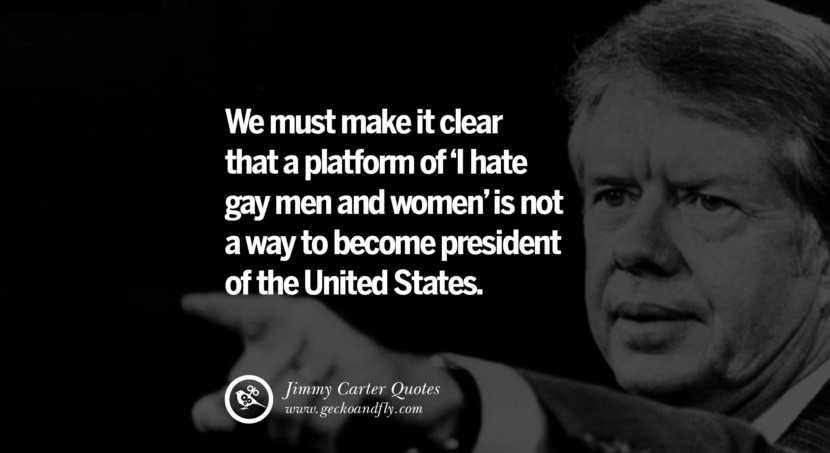 We must make it clear that a platform of ‘I hate gay men and women’ is not a way to become president of the United States. – Jimmy Carter 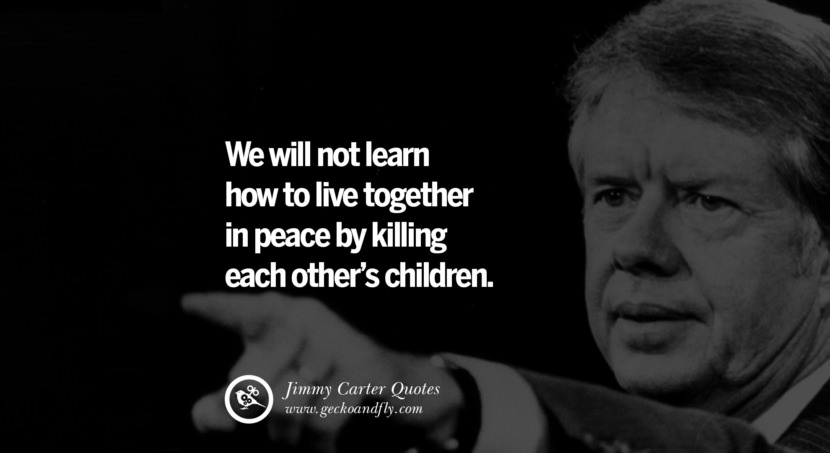 We will not learn how to live together in peace by killing each other’s children. – Jimmy Carter 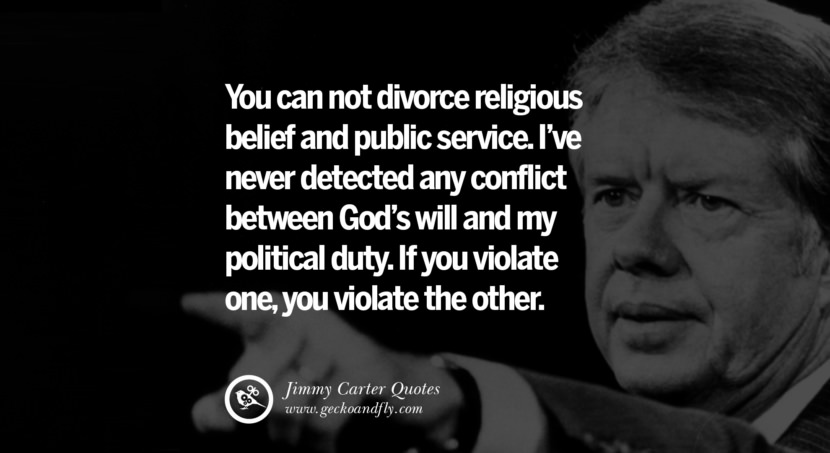 You can not divorce religious belief and public service. I’ve never detected any conflict between God’s will and my political duty. If you violate one, you violate the other. – Jimmy Carter 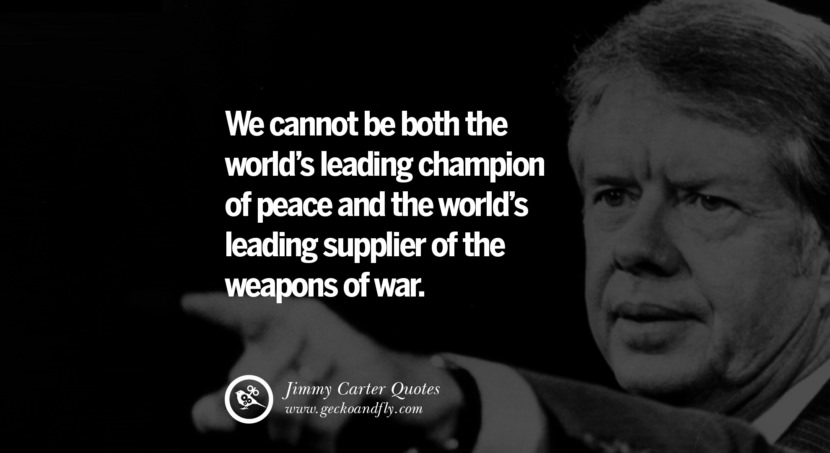 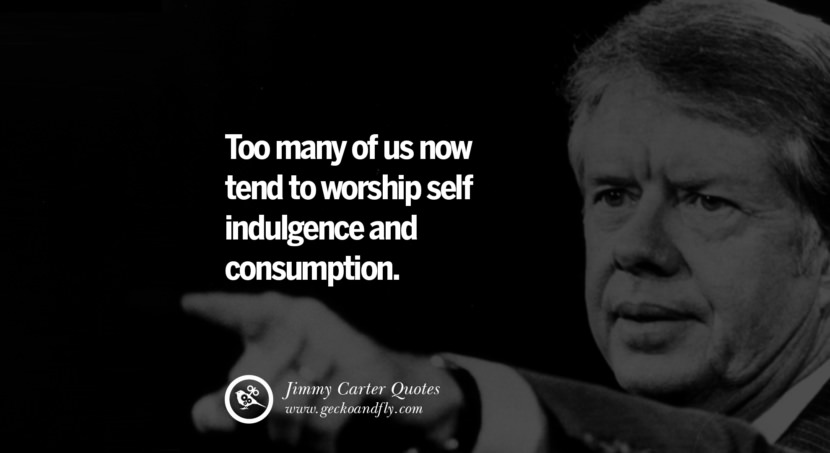 Too many of us now tend to worship self indulgence and consumption. – Jimmy Carter 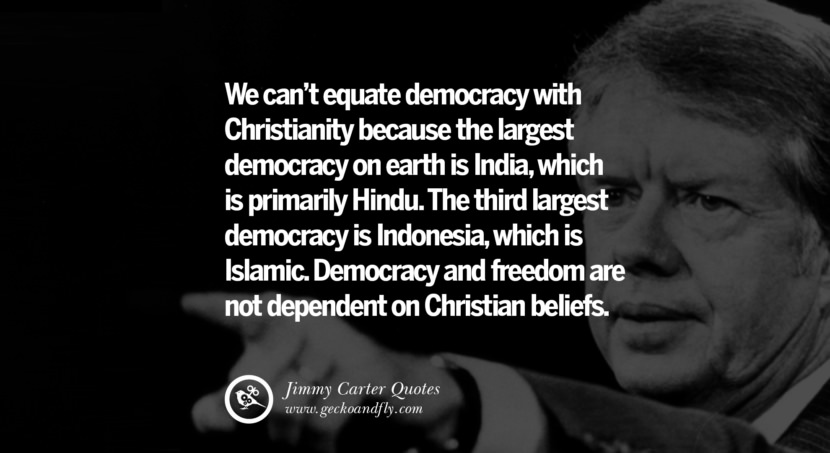 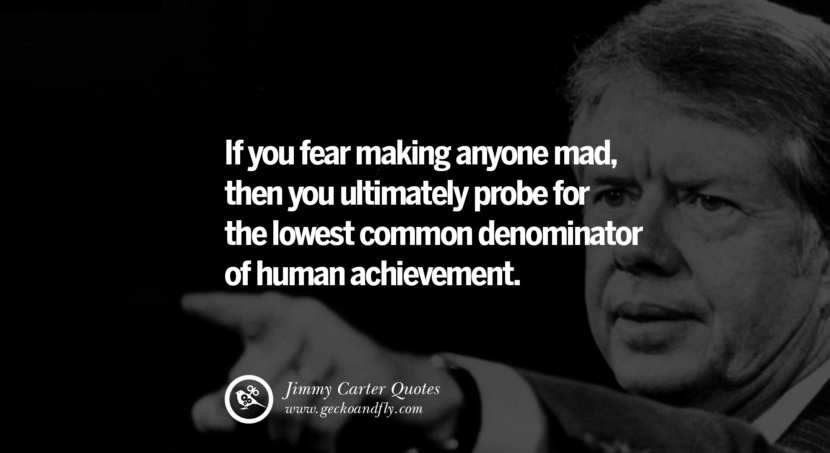 If you fear making anyone mad, then you ultimately probe for the lowest common denominator of human achievement. – Jimmy Carter 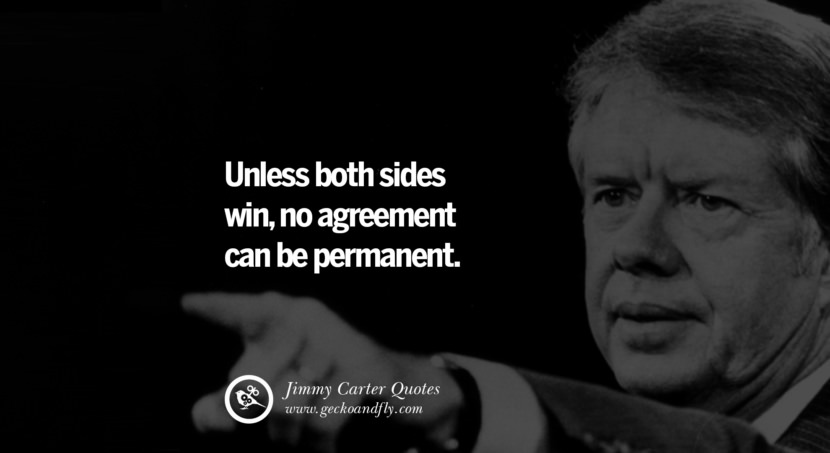 Unless both sides win, no agreement can be permanent. – Jimmy Carter 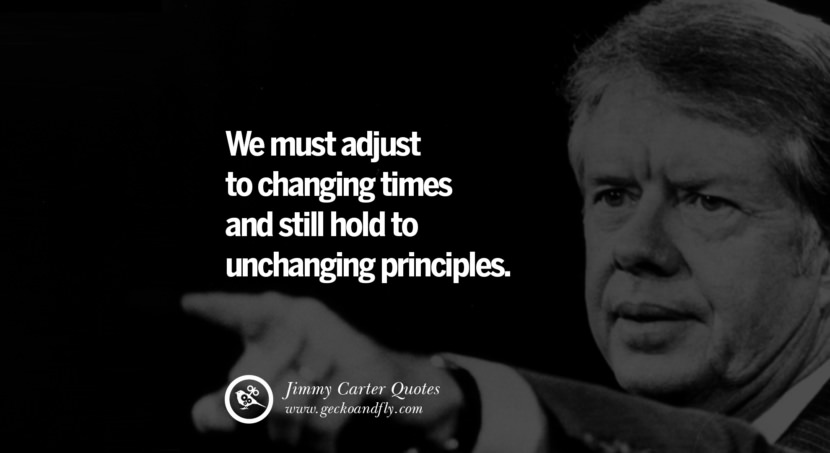 We must adjust to changing times and still hold to unchanging principles. – Jimmy Carter

Elected to the presidency in 1976 as an outsider who promised to transform the nations cynicism towards Beltway politics, Jimmy Carter served a tumultuous single term in the nations highest office. This American Experience program traces Carters fascinating political career from his modest beginnings in Plains, Georgia, to the deeply religious leaders tenure as the 39th President of the United States

When Did You Choose to Be Straight?

Street interviews conducted by Travis Nuckolls and Chris Baker in Colorado Springs prove that asking the right question can be more important than anything you can tell someone.