There are many fake capacity USB flash drives on the market that claim a particular capacity, but only deliver somewhat less than this (particularly the larger drives). This is sometimes referred to as fake ‘oversize capacity’. The counterfeit drives we have examined appear to have the stated capacity in Windows Properties and it is not until you test the drive with these software that you see that there is significantly less real space.

There is also a similar problem of low quality drives (which may or may not also be counterfeit). These drives might have the capacity they state on the box, but be of such low quality that they corrupt files or lose data stored on them due to bad sectors. While many stores, such as Ebay and other online auctions, provide information on how to detect some of these fake USB flash drives, they generally rely on physical markings on the drive, such as incorrect serial numbers or typing mistakes on the packaging. Of course this only works for well known documented cases of counterfeit SSD drives, Flash Drive, SD Cards etc.

To avoid being cheated, ask the seller to run through their Flash Drive with one of these software and have the report emailed back to you. This will be a legal document in the event that he or she willingly sold you a fake product that doesn’t match the description. Here are some software that enables you to test the true capacity of your microSD Cards by SanDisk, Samsung, Lexar, Transcend, Kingston, Toshiba, Sony, Western Digital, ADATA and more. 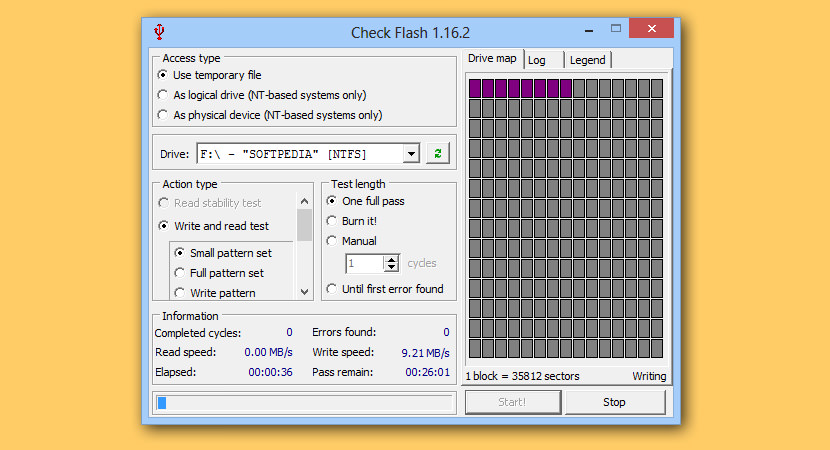 Check Flash is a tool for testing and formatting flash-drives. It can be used to clean any evidence of activity on your flash drive by formatting it.With Check Flash you will be able to manage your flash drives by performing different maintenance tests on it. Except surface testing, allows check speed of reading and writing, edit partition info, save and restore full drive and partition images, save and restore MBR. Also can perform full drive or partition cleaning. Process speed is highest what a given device can provide, no faster full test can be found in the world. 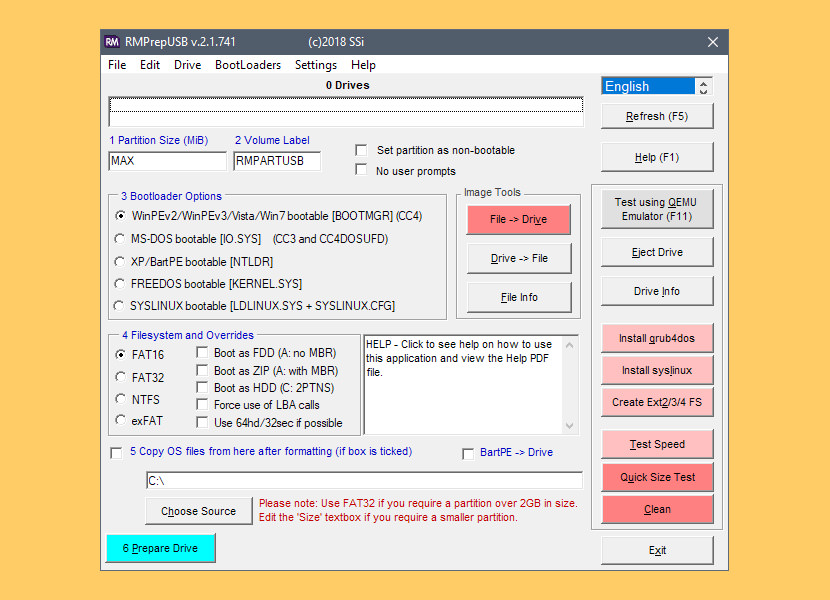 RMPrepUSB’s “Quick Size Test” feature checks the drive capacity in just a few minutes by writing and reading to certain blocks. This test will DESTROY any files on your USB drive and is not a thorough test, if it passes then use H2TESTW for a thorough test (which can take many hours!)

H2testw 1.4 is the software victims of flash memory fraud use to test the real capacity of flash memory storage chips. Wise resellers use it to ensure inventory purchased is not for fakes before they list mp players, usb flash drives or memory cards on the internet to sell. H2testw 1.4 operates in English and German, it is a free software to download and use. 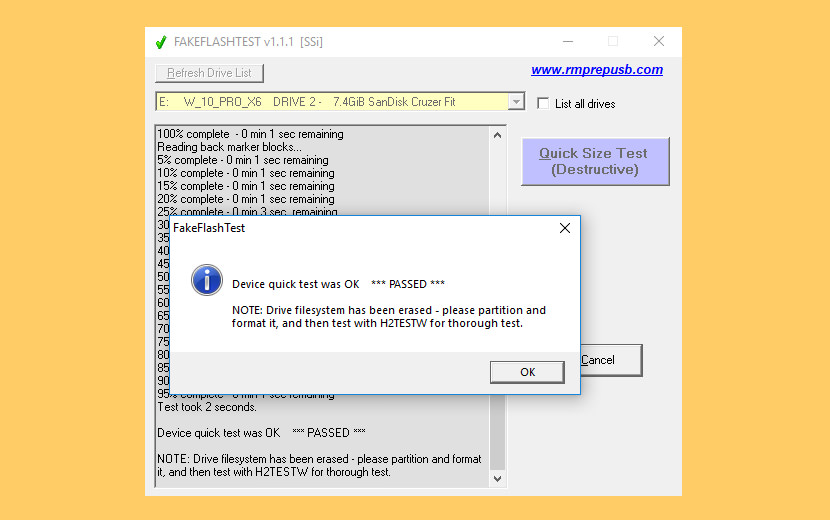 The application was created to identify false data storage media that appear more frequently on Internet auctions unscrupulous traders. Carriers having a capacity of eg. 64 GB in fact offer a record of up to 1 GB of data. Displaying inaccurate information regarding the system disk capacity is the result of a suitable memory mapping. FakeFlashTest during the review process overwrites all data carriers. Before starting the process to verify the capacity of the selected drive or SD card, please make a copy of all stored files. 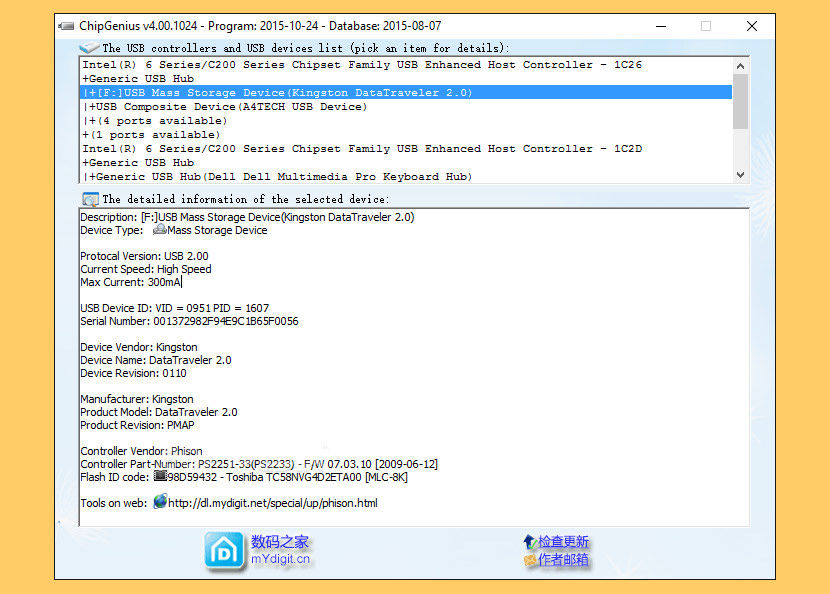 If you have a USB Flash drive, try using ChipGenius as a first test and a very quick ‘test’. Often this will reveal the true size of the memory chips(s) fitted by the manufacturer. 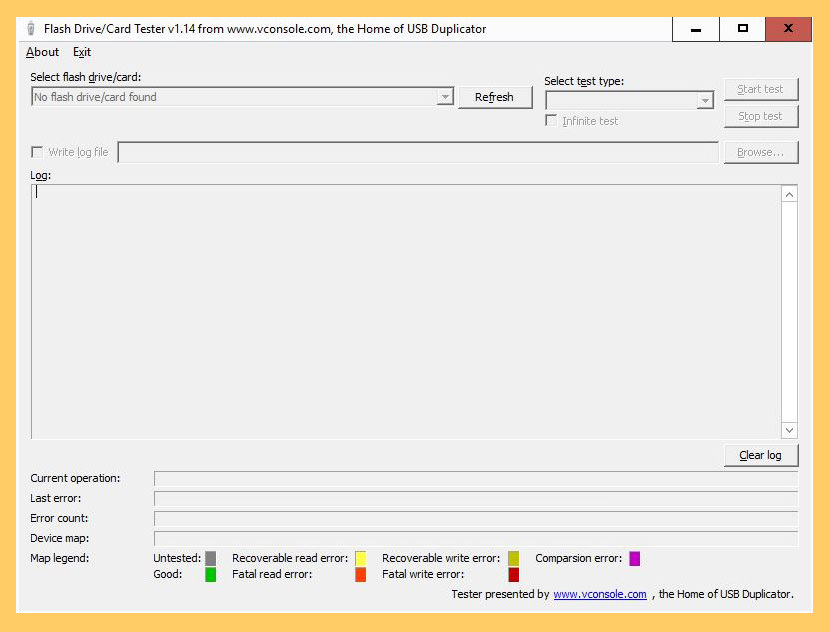 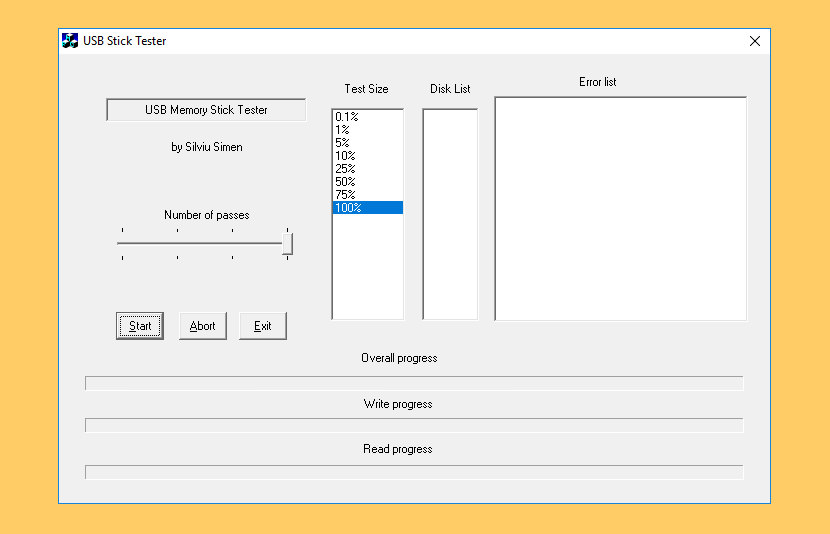 Using BurnInTest you can actually test whether your USB flash drive has the amount of storage it claims or not, and test the ability of the drive to store and retrieve data without corruption. BurnInTest can be used to write, read and verify large amounts of data to and from the drive, detecting oversize capacity and poor quality drives in the process. This process assumes you already have a licensed version of the BurnInTest software. (You can use the eval edition of BurnInTest, but the evaluation edition is limited to 15min runs which might not be not run long enough to test large drives) 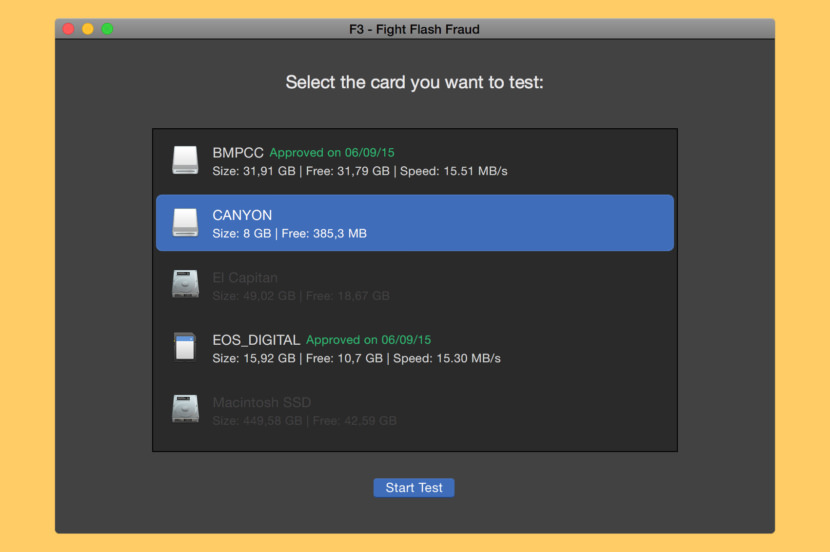 f3 is a simple tool that tests flashcards capacity and performance to see if they live up to claimed specifications. f3probe is the fastest way to identify fake drives and their real sizes. f3fix enables users to use the real capacity of fake drives without losing data. f3brew helps developers to infer how fake drives work. f3probe, f3fix, and f3brew currently run only on Linux. 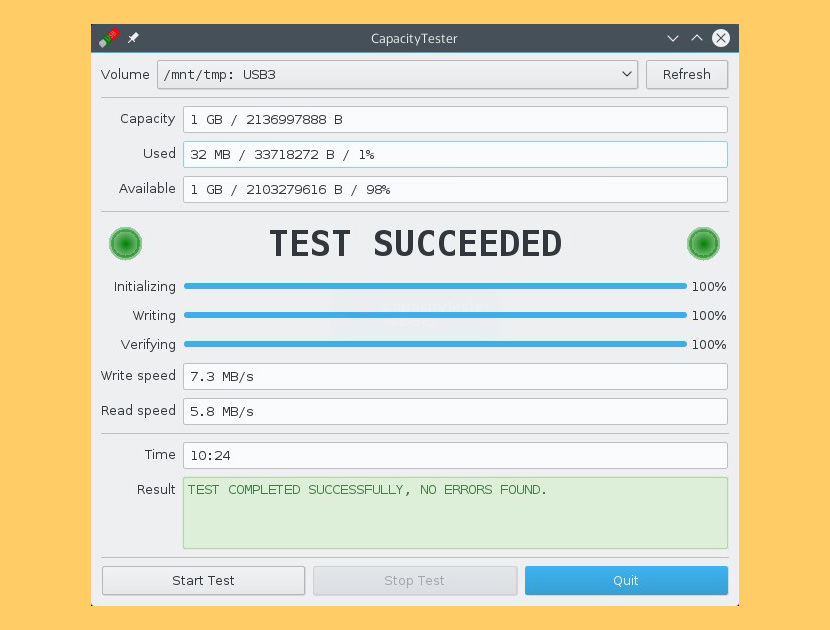 This tool can test a USB drive or memory card to find out if it’s a fake. For example, a fake might be sold as “64 GB USB thumb drive” but it would only have a real capacity of 4 GB, everything beyond this limit will be lost. Write requests beyond that limit might be ignored without error, so a user would not be notified about the data loss. This tool performs a simple test to determine if the full capacity is usable or not. All it does is fill the volume with test data and verify if the data on the volume is correct. The volume must be completely empty for the test to provide reliable results. 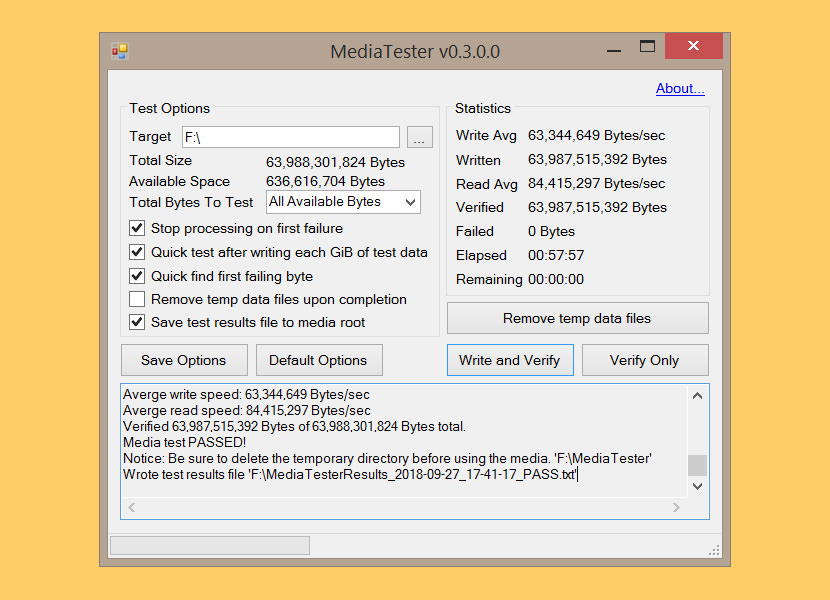 MediaTester can test any media (SD, microSD, thumb, etc) and verify it stores the expected number of bytes. The testing method is similar to h2testw but MediaTester can detect fake or defective media much faster by performing quick reads as data is written. If you buy any storage media, you should use MediaTester to verify it or risk losing your data.

Fake media sales have reached epidemic proportions. Fake media is being falsely labeled with popular brand names including SanDisk, Samsung, Sony, Kingston, and others. Not only are these counterfeit but they often contain less storage than the cards report to the computer. A 128GB SD card may actually contain only 8GB or 4GB of actual space. After filling up all of the real space, the card will respond as if it is storing the data but it is actually throwing it away. The files will look like they exist but they are actually full of null bytes or completely corrupted. If you try to read the data you will find that it is ALL GONE.

Scam SD cards are common. These fake capacities with firmware, explained in this video, will appear as “32GB” (or even up to “1TB”), but might only support 4GB in reality. It’s often obvious that it’s a scam, like with mismatched prices or untrusted sellers, but these fake SD cards have begun infiltrating the likes of large online retailers and physical retailers.

Illegitimate capacities and/or write class. Remember, if the price is too good, the product is probably bunk.﻿