Notepad++ is by far the most popular code editor in the market, it is free but limited to Microsoft Windows OS only, for those into coding on a macOS and Linux, here are some Notepad++ alternatives, the best programming text editors.

For those into wysiwyg editors, I highly advise on learning basic web coding, wysiwyg editor is nothing more than a gimmick and the codes are always messy. The best way to code on WordPress, Drupal, or Joomla web sites is none other than via a proper code editor with html and php. 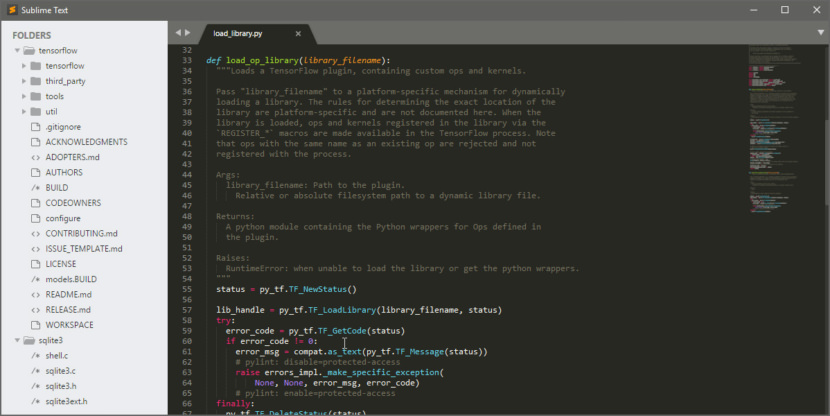 Vim (“Vi IMproved”) is an advanced text editor that allows syntax highlighting, word completion and has a huge amount of contributed content. Vim offers several “modes” for editing with efficiency. This makes vim a non-user-friendly application but it is also a strength. The normal mode binds alphanumeric keys to task-oriented commands. The visual mode highlights text. The command-line mode offers more tools (for search & replace, defining functions, etc.) Vim is rock stable and is continuously being developed to become even better. Among its features are:

Code combines the streamlined UI of a modern html editor free with rich code assistance and navigation, and an integrated debugging experience – without the need for a full IDE. Free visual web editor.

Komodo Edit is a simple text editor, fast, smart, free and open-source code editor. Switching your trusty code editor is hard, but give Komodo Edit (or its big brother Small Komodo IDE iconKomodo IDE) a try: it’ll be worth your while. Komodo IDE is the single IDE for all your major languages including Python, PHP, Go, Ruby, Perl, Tcl, NodeJS, HTML, CSS and JavaScript. One license for all your languages means that when your projects change, your IDE doesn’t have to, saving you time, effort, and money; no need to change IDEs and ramp up the team from scratch! In addition to supporting many languages, Komodo also supports a plethora of popular frameworks including Django, PHPUnit, Perl TAP, Python unittest, Ruby’s rake test, and more.

The world’s most powerful open-source web development IDE just got better. Rebuilt from the ground-up. It’s now much faster, customizable and includes new features to help you be more productive. Build web applications quickly and easily using the industry’s leading web application IDE. Aptana Studio harnesses the flexibility of Eclipse and focuses it into a powerful web development engine.

Brackets is an open-source project, supported by an active and passionate community. It’s made by other web developers like you! With focused visual tools and preprocessor support, Brackets is a modern text editor that makes it easy to design in the browser. It’s crafted from the ground up for web designers and front-end developers.

Brackets is a lightweight, yet powerful, modern text editor. We blend visual tools into the editor so you get the right amount of help when you want it without getting in the way of your creative process. You’ll enjoy writing code in Brackets.

Work with preprocessors in a whole new way. We know how important preprocessors are to your workflow. That’s why we want to make Brackets the best code editor for preprocessors out there. With Brackets you can use Quick Edit and Live Highlight with your LESS and SCSS files which will make working with them easier than ever. 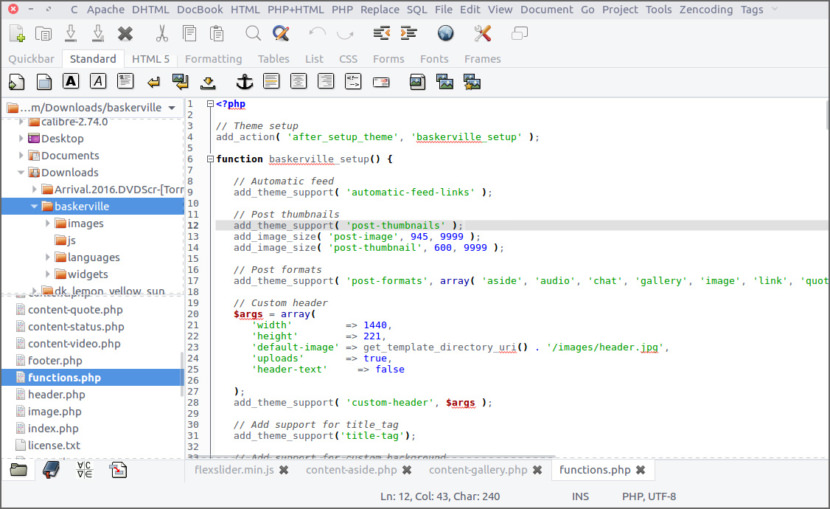 Bluefish is a powerful editor targeted towards programmers and web designers, with many options to write websites, scripts and programming code. Bluefish supports many programming and markup languages, and it focuses on editing dynamic and interactive websites. Bluefish is a multi-platform application that runs on most desktop operating systems including Linux, FreeBSD, MacOS-X, Windows, OpenBSD and Solaris.

Auto-completion and auto-tag-closing for many programming languages, with reference information, and even for nested languages (e.g. css and javascript inside html code that is inside a php document) with included language definition files for:

Visual Studio supports different programming languages and allows the code editor and debugger to support (to varying degrees) nearly any programming language, provided a language-specific service exists. Built-in languages include C, C++ and C++/CLI (via Visual C++), VB.NET (via Visual Basic .NET), C# (via Visual C#), and F# (as of Visual Studio 2010). Support for other languages such as M, Python, and Ruby among others is available via language services installed separately. It also supports XML/XSLT, HTML/XHTML, JavaScript and CSS. 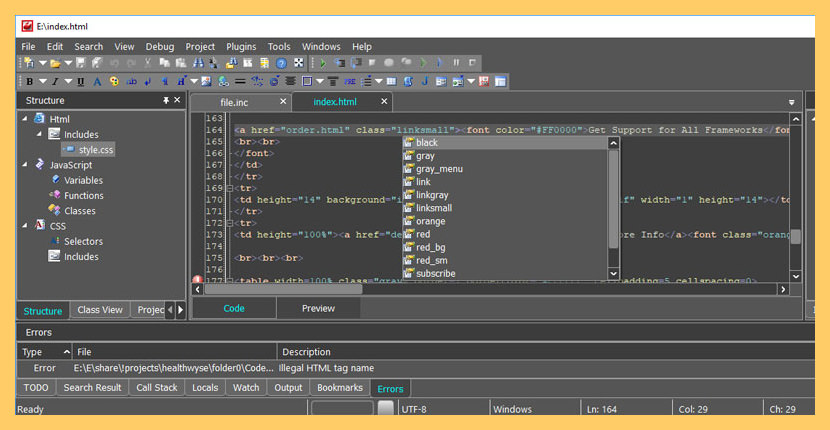 CodeLobster IDE streamlines and simplifies the PHP development process. You don’t need to keep in mind the names of functions, arguments, tags or their attributes — we’ve implemented all these for you with autocomplete features for PHP, HTML, JavaScript and even CSS. And you can always get necessary help information by pressing F1 or using the special Help control. 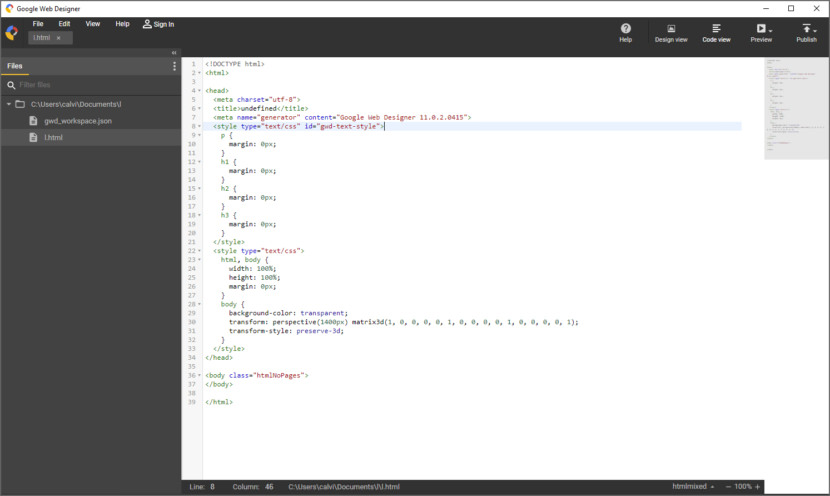 Create engaging, interactive HTML5-based designs and motion graphics that can run on any device. Google Web Designer was designed for creating ads, html5 ads to be exact but it can also double up as a html5 coding tool. Google Web Designer gives you the power to create beautiful, engaging HTML5 content. Use animation and interactive elements to bring your creative vision to life, and enjoy seamless integration with other Google products, like Google Drive, Display & Video 360, and Google Ads. 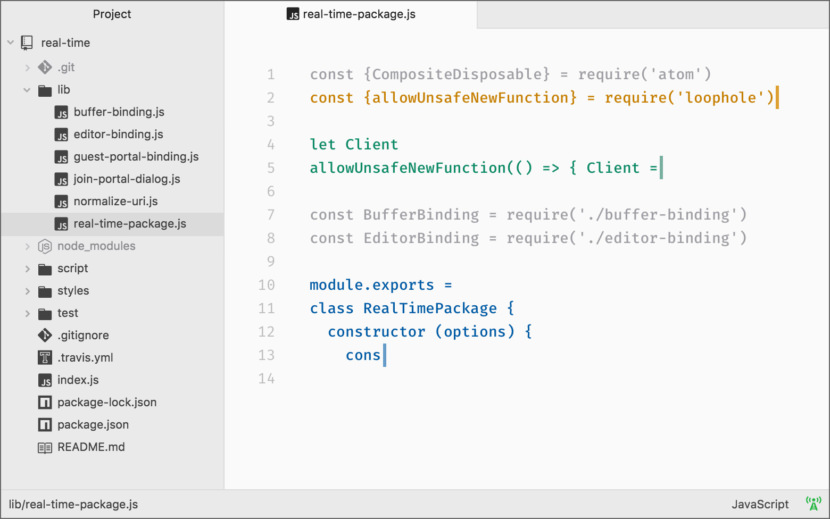