Depending on factors outside your control, performance can be unreliable, at the same time there is a high privacy and security risk involved with storing certain data on someone else’s ‘cloud’ computer unless you pay a premium for enterprise military grade encryption.

This is where Prosumer comes into play, it hits the sweet spot between Consumer and Professional. Storage Operating System allows you to set up your own ‘Cloud’ on your network at your own cost. Because these OS uses a desktop computer as a storage system, it doesn’t make any sense for Home Users to run it for 24/7, if you’re into creating a central network storage system for your house, get a consumer NAS Storage from WD Red, D-Link, Asus or Seagate IronWolf. Without further ado, here are some free and open-source network-attached storage (NAS) OS software for small businesses. 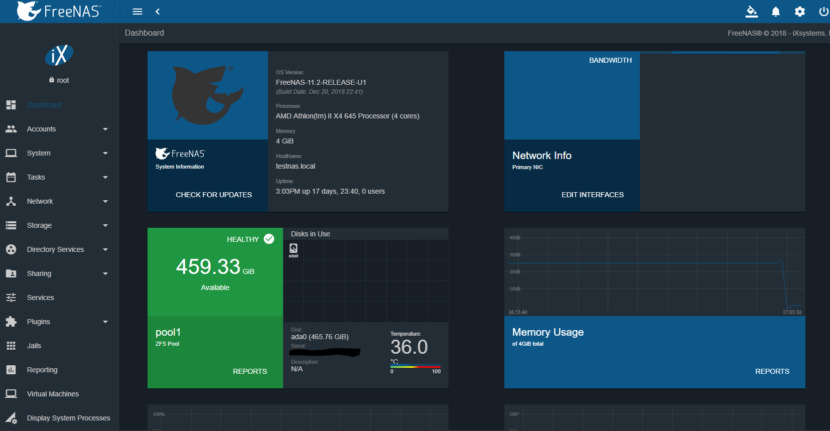 What is FreeNAS? FreeNAS is an operating system that can be installed on virtually any hardware platform to share data over a network. FreeNAS is the simplest way to create a centralized and easily accessible place for your data. Use FreeNAS with ZFS to protect, store, backup, all of your data. FreeNAS is used everywhere, for the home, small business, and the enterprise.

What is ZFS? ZFS is an enterprise-ready open source file system, RAID controller, and volume manager with unprecedented flexibility and an uncompromising commitment to data integrity. It eliminates most, if not all of the shortcomings found in legacy file systems and hardware RAID devices. Once you go to ZFS, you will never want to go back. 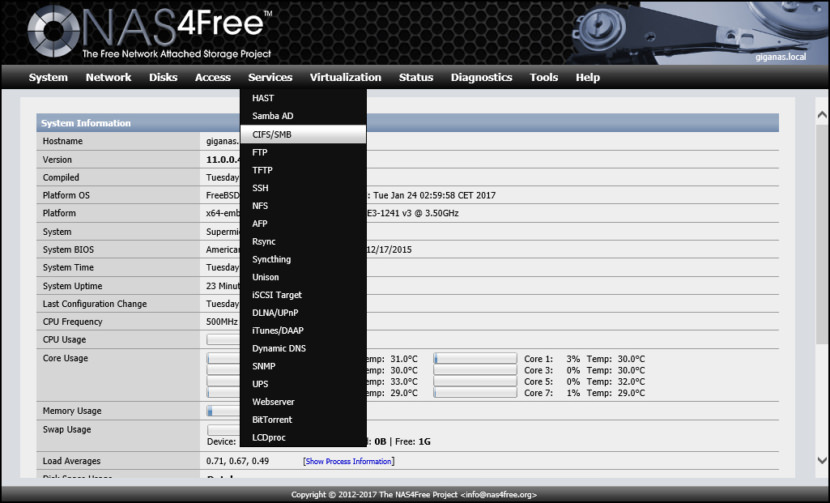 XigmaNAS / NAS4Free is an Open Source Storage NAS (Network-Attached Storage) distribution based on FreeBSD. The NAS4Free operating system can be installed on virtually any hardware platform to share computer data storage over a computer network. ‘NAS’ as in “Network-Attached Storage” and ‘4Free’ as in ‘Free and open source’, NAS4Free is the simplest and fastest way to create a centralized and easily-accessible server for all kinds of data easily accessed with all kinds of network protocols and from any network. 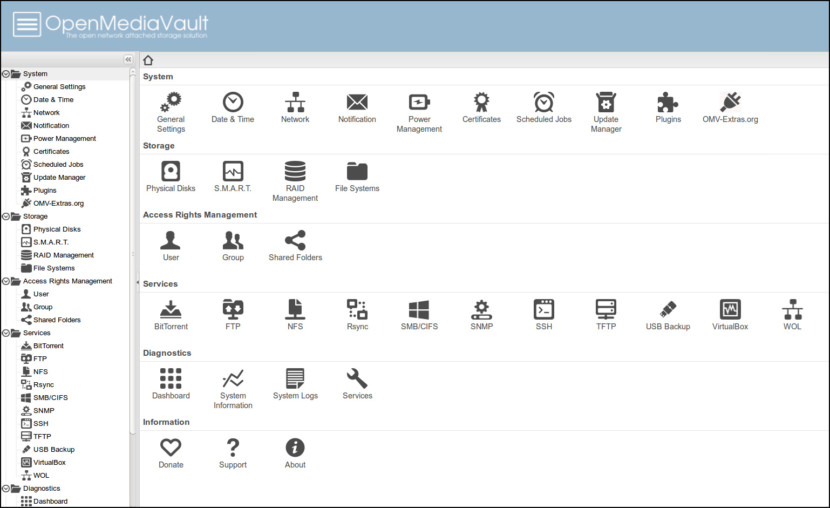 openmediavault is the next generation network attached storage (NAS) solution based on Debian Linux. It contains services like SSH, (S)FTP, SMB/CIFS, DAAP media server, RSync, BitTorrent client and many more. Thanks to the modular design of the framework it can be enhanced via plugins.

openmediavault is primarily designed to be used in small offices or home offices, but is not limited to those scenarios. It is a simple and easy to use out-of-the-box solution that will allow everyone to install and administer a Network Attached Storage without deeper knowledge. 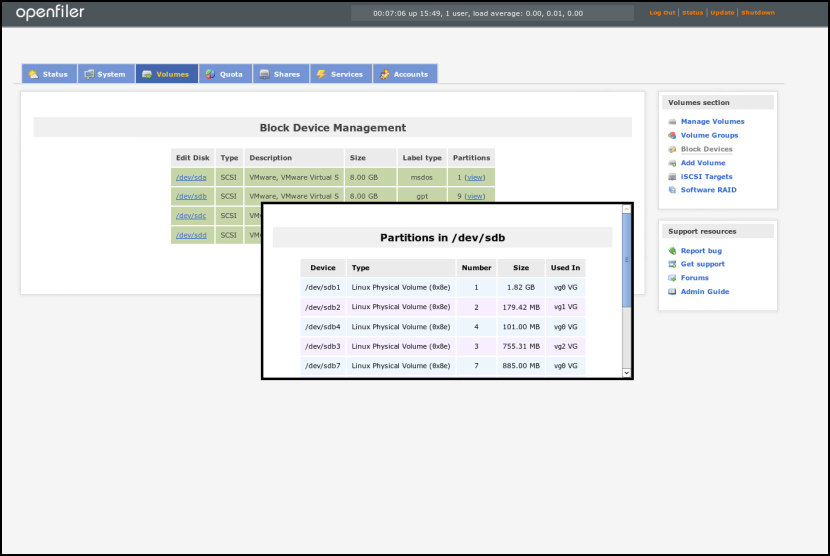 Openfiler converts an industry standard x86_64 architecture system into a full-fledged NAS/SAN appliance or IP storage gateway and provides storage administrators with a powerful tool to cope with burgeoning storage needs. Openfiler ensures that storage administrators are able to make the best use of system performance and storage capacity resources when allocating and managing storage in a multi-platform network. 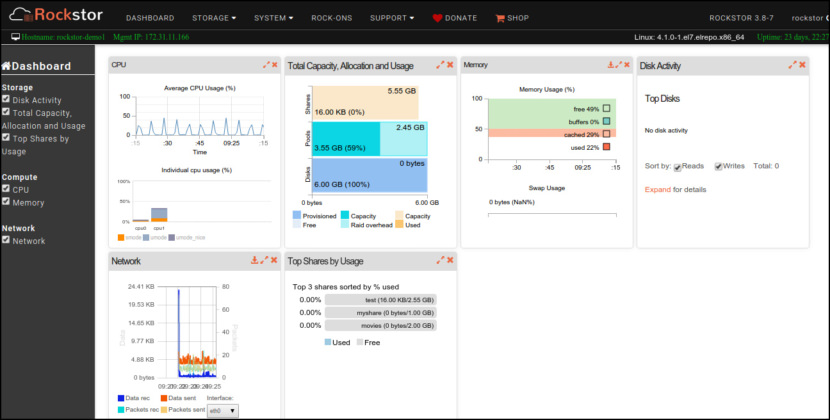 Build and manage your own Linux & BTRFS powered advanced NAS and Cloud storage with ease. Rockstor Small and Midsize Business (SMB) Cloud Server is the recommended solution for organizations with several hundred Terabytes of capacity requirement. Your organization may rely on expensive public cloud storage and also store a lot of data locally causing you to switch between local and cloud and ultimately resulting in inefficiency and loss of productivity. With Rockstor as your Cloud Server, works great on Microsoft’s Windows 10 and Apple’s macOS. 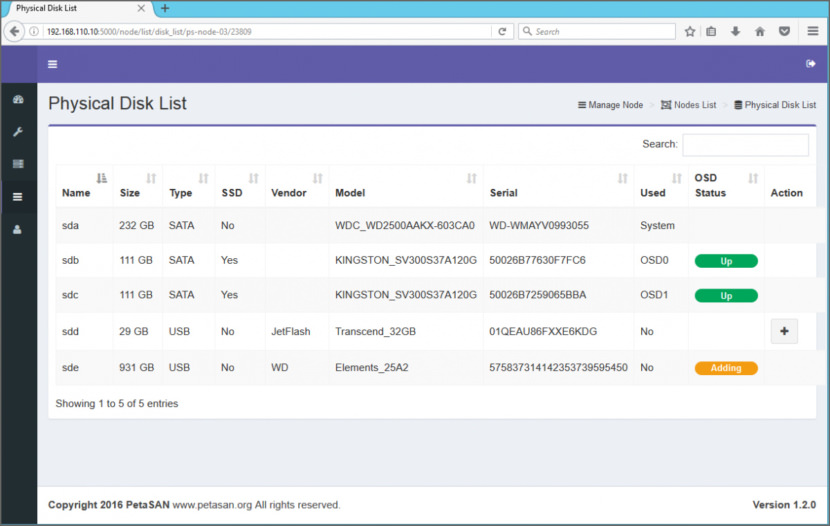 PetaSAN is an open source Scale-Out SAN solution offering massive scalability and performance. PetaSAN uses modern cloud based technologies to provide the elasticity and agility to scale up the storage cluster simply by adding more nodes, this can be done at any time and in a truly non-disruptive manner.

PetaSAN is designed from the ground up to do one thing: provide highly available clustered iSCSI disks. In PetaSAN, an iSCSI disk can have many access paths, each identified by its virtual IP address. These IP addresses are clustered across several storage nodes. 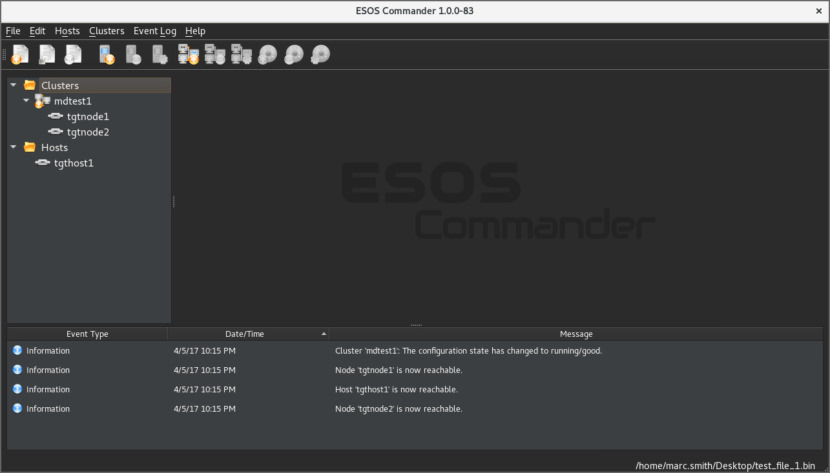 Enterprise Storage OS is a quasi Linux distribution based on the excellent SCST project; its purpose is to provide SCSI targets via a compatible SAN (Fibre Channel, InfiniBand, iSCSI, FCoE). In a nutshell, ESOS® can easily turn a server with the appropriate hardware into a disk array that sits on your enterprise Storage Area Network (SAN) providing sharable block-level storage volumes.

Typical uses for an ESOS® “storage server” include VMFS datastores on VMware ESX/ESXi, Windows NTFS volumes, Linux disks, etc. A high performance, purpose-built (appliance like) Linux base built from scratch, with no relation to other Linux distributions. 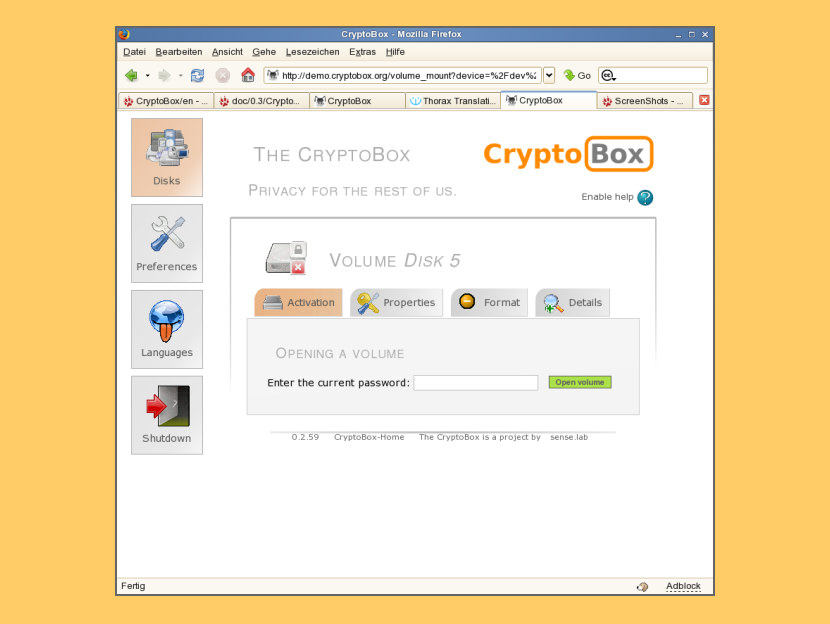