How to uninstall Kaspersky Antivirus? It is important that any previously installed antivirus software is uninstalled from your Windows system before installing another new or different security software. Typical uninstallation via the Microsoft Windows removal tool (Add/Remove Programs) often does the job, However there are times when you may experience issues using the normal method and these official tools below will assist you. 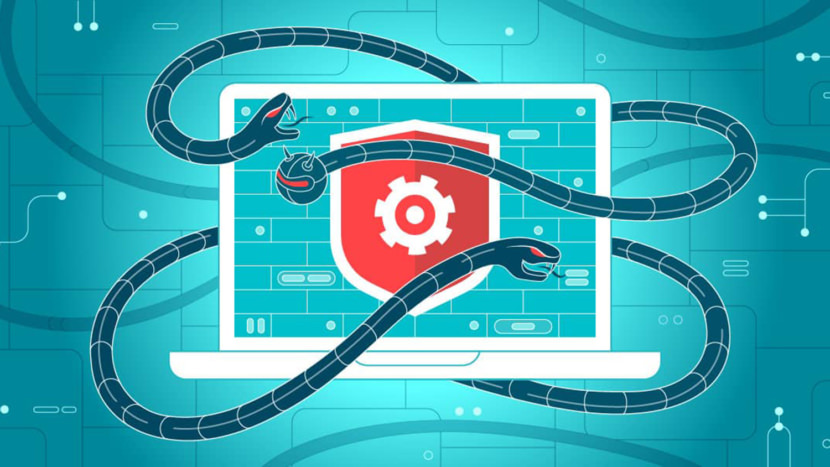 This antivirus uninstaller deletes all files associated with their antivirus product, including registry items, installation files, and user files. Only use this if you are having problems uninstalling them. Other than that, the normal method via Windows Add and Remove program is sufficient enough. If you are having problems uninstalling McAfee Antivirus or Avast Antivirus, how to remove antivirus from your laptop? Download these tools.

a How to remove, reset or recover your forgotten Lenovo, HP, Dell, Acer, and Asus Laptops laptop BIOS password? There are many methods, each method has its own strength and weakness. If you forgot your BIOS password, chances are you don’t have access to your computer, not even in Safe Mode, therefore making this software useless. For Desktop users, removing the battery for 5 minutes will reset the BIOS whereas laptop users might not have the option without invalidating the warranty of the laptop, this is where software comes in handy. 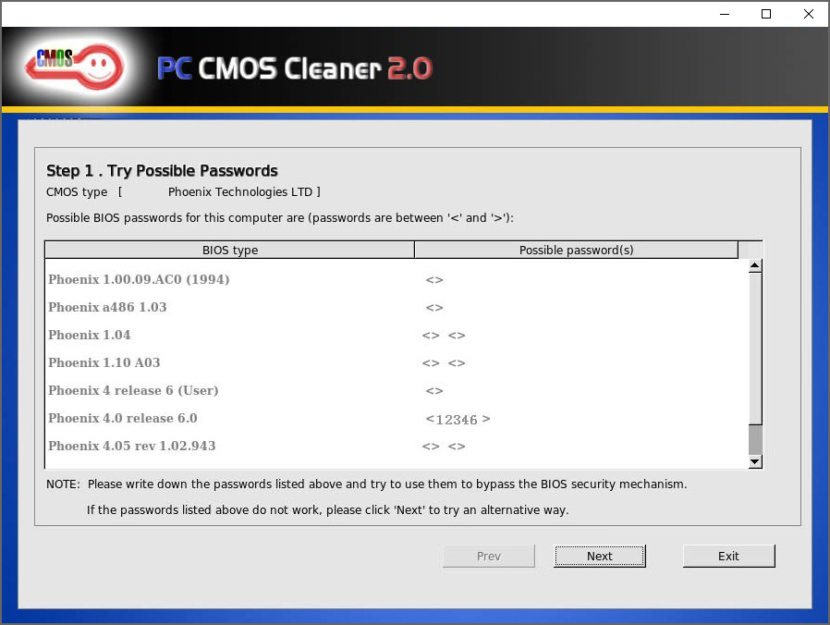 PC CMOS Cleaner is an easy-to-use tool to recover, delete, decode and display the superior passwords stored in BIOS whatever the brand is. Most types of BIOS are supported. It’s a bootable CD that runs on x86 and x86_64 computers. No need to pay expensive fees to experts. It’s a useful tool for users to get their lost BIOS password back, or clean passwords from an old computer bought from others. 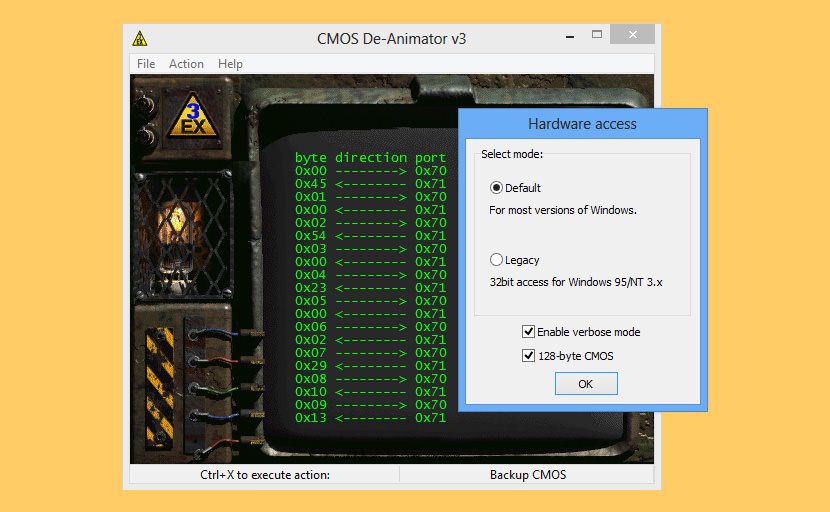 CMOS De-Animator is a service utility for your system’s CMOS RAM. Unlike its predecessor, the CMOS De-Animator 2.0, the new version includes a graphical interface and CMOS-backup options along with the “Clear CMOS” procedure, which was the original version’s only purpose. So, you can now backup the main CMOS settings to a file, or restore them later. The application supports all 32-bit and 64-bit Windows operating systems except Windows 95 and Windows NT 3.51; for these old systems, you have to use De-Animator’s previous version.

Compared with CMOS De-Animator v2, the new features include an interactive GUI, command-line support with optional silent (unattended operation) switch, log file generation, and experimental EEPROM / low level BIOS reading support! Original features – backup, restore and reset the CMOS RAM – of the old De-Animator are, of course, intact and still conveniently accessible. The same goes for extreme backward compatibility, just as with previous versions – the application runs on a Windows NT 3.51 just as fine as under Windows 8, 32-bit or 64-bit! 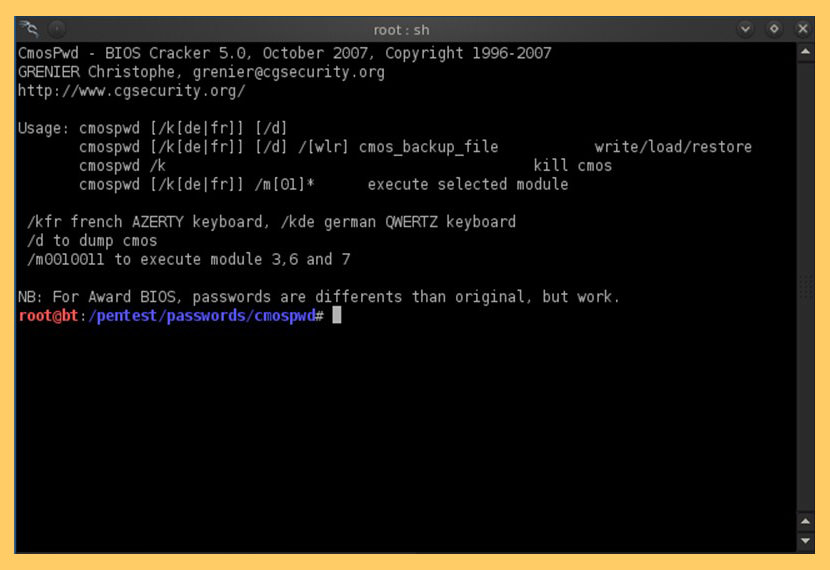 CmosPwd decrypts password stored in cmos used to access BIOS SETUP. The software is also able to save the configuration of a BIOS, which protects the data by duplicating and storing it in a secure location on the hard disk. With CmosPwd, you can also backup, restore and erase/kill cmos. CmosPwd is free, it’s distributed under Open Source GPL. Works with the following BIOSes

!Bios ( a very old program, might work on older computers ) is a tool originally developed for a brute, blunt removal of passwords from BIOSes. Through its development it has been severely extended, and Eleventh Alliance have now received emails from computer support divisions, hackers and not least of all ordinary computer users who have expressed gratitude for what they consider one of the best toolkits available.

There’s a jumper on your motherboard that you’ll need to identify and remove. Most motherboards make your job easier by actually labeling the correct jumper as “BIOS config” or something similar. Remove the jumper, and then turn the computer on. In some cases, you will have to remove the jumper while the system is powered up, though to minimize risk, try doing this first with the computer off. In today’s quick tip I show off the quick and easy process of resetting the CMOS on your computer. Simply move the CMOS jumper to the last 2 pins for about 5-10 seconds depending on your motherboard, and then replace it back to its original position.

For desktop users, open up your computer casing and look for the battery. Remove the battery for approximately 5 minutes (maybe longer, depending on the motherboard) and slot it back. By removing the battery and depriving the motherboard’s flash memory of power supply, you are essentially resetting the settings back to default when the existing data in BIOS are cleared. This method works well for desktop, however this is not practical for laptop users unless the warranty expired a long time ago. This method might or not not work, it depends on the type of motherboard. 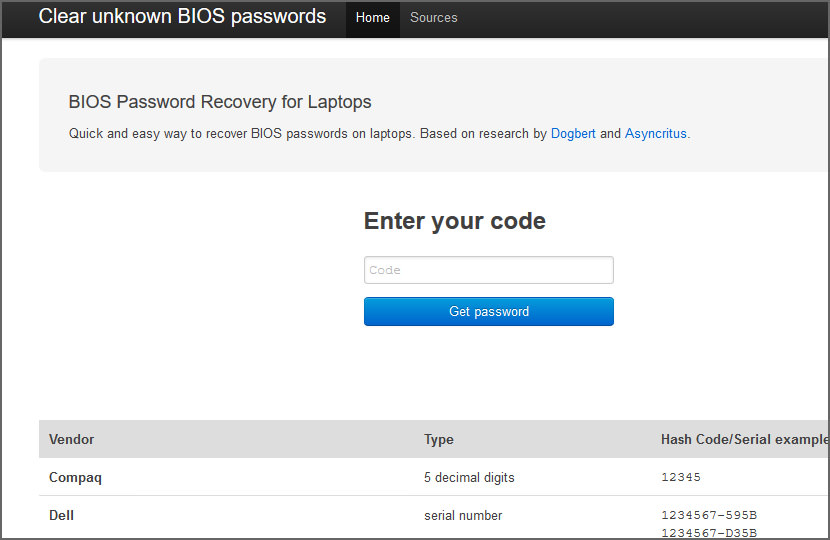 How to Reset a Dell laptop BIOS Password? Quick and easy way to recover BIOS passwords on laptops, this site contains master password generators for various BIOS/UEFI firmware. Based on research by Dogbert and Asyncritus. When a laptop is locked with a password, a checksum of that password is stored to a so-called FlashROM – this is a chip on the mainboard of the device which also contains the BIOS code and other settings, e.g. memory timings. For most brands, this checksum is displayed after entering an invalid password for the third time.

The dramatic ‘System Disabled’ message is just scare tactics: when you remove all power from the laptop and reboot it, it will work just as before. From such a checksum (also called “hash”), valid passwords can be found by means of brute-forcing. Works on Fujitsu-Siemens, Dell, Compaq, Acer, HP Hewlett-Packard, Sony, Samsung and more.

This method works if you have access to Windows because this method requires MS DOS. Open Command Prompt from Programs menu and provide following commands:

Important – The first character in the above commands is English alphabet “o” and not the number 0. Now, after providing the above commands in MS DOS, restart your system and it should automatically reset the CMOS Settings along with the BIOS password. How does it work? In this “MS DOS Debug Command” method, the “o” character present at first in these commands, outputs the values to IO ports. The number 70 and 71 are port numbers which are used to access CMOS memory. By providing FF value we are telling CMOS that there is an invalid checksum and it resets the CMOS settings as well as BIOS password.

Some BIOS manufacturers or the laptop maker put a backdoor password in BIOS and will always work regardless of what password you have set in the BIOS. It is a master password which is used for testing and troubleshooting purposes, or in the event you lock yourself out of your own laptop.

The BIOS is the basic instruction set that “teaches” the computer how to access its media. If the BIOS is password protected, the computer will not function without the password. BIOS passwords are used in two ways: To prevent modification of the BIOS settings and to completely stop the computer from booting.

If you’ve got crucial data on your system, need it urgently, and can’t get past the BIOS. Remember that you can always remove the hard drive with the data and access it from another system. The BIOS password (typically) only pertains to the motherboard. There are some manufacturers, IBM and Dell included, who are encrypting the HDD to the motherboard. If this is the case, try contacting the manufacturer for a password to unlock the HDD.