Edward Snowden exposed the need for us to have a more secure way of sending messages via smartphone, it is now known that the NSA monitors all messages across the globe. All text messages are logged and crawled by an A.I, these messages are stored permanently in a NSA server for future references, this includes SnapChat.

Remember, everything man made can be unmade. Even with these so-called secured text messengers, these chat messages are still retrievable. The technology driving most of these programs is called “end-to-end encryption,” which means that a message is ciphered before it’s sent and then deciphered after its received, with a powerful computer, these secure encrypted message can be cracked, this is because there is a need to read secret messages between terrorist, loan sharks, murderers, drug lords and more. 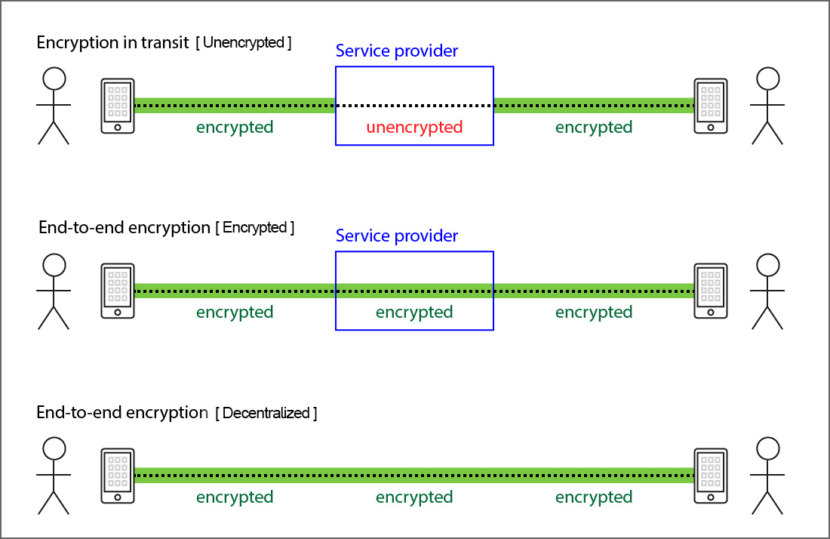 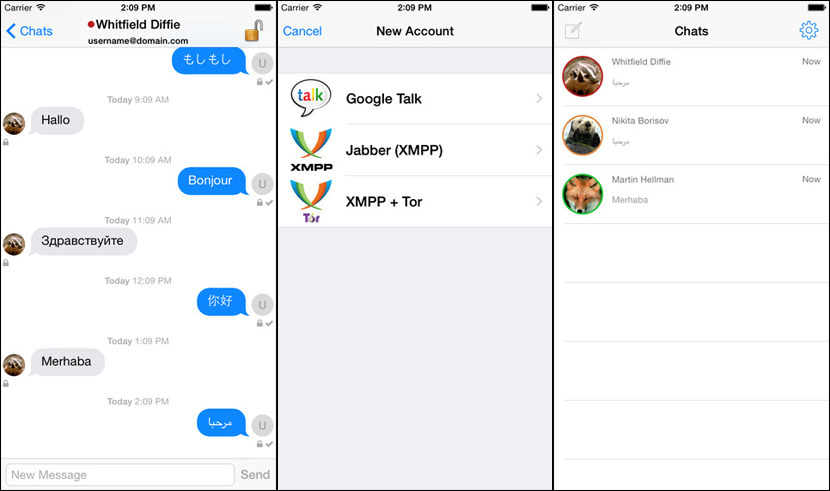 ChatSecure is a free and open source messaging app that features OTR encryption over XMPP. You can connect to an existing Google account, create new accounts on public XMPP servers (including via Tor), or even connect to your own server for extra security. Unlike other apps that keep you stuck in their walled garden, ChatSecure is fully interoperable with other clients that support OTR and XMPP, such as Adium, Jitsi, and more. ChatSecure only uses well-known open source cryptographic libraries to keep your conversations private. Other apps may make claims about ‘military grade’ security but, without publicly auditable source code and verifiable end-to-end encryption, you cannot be truly safe. 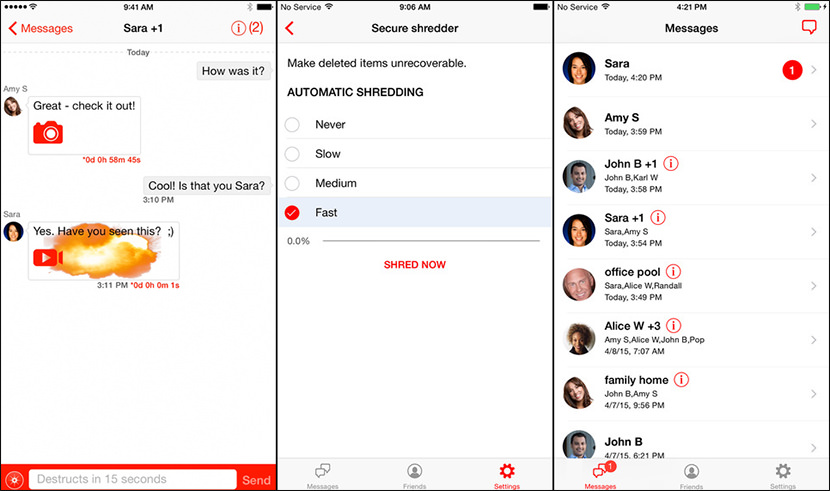 Wickr is a messaging platform designed to give control over security back to the users. Trusted by world leaders, executives, journalists, human rights activists, celebrities, and your closest friends. Wickr’s code, policies and promises have been verified by four of the most respected organizations in the world. The Wickr team is made up of security and privacy experts dedicated to building a strong social system around the world by providing a secure, private communication platform to everyone. Wickr is headquartered in San Francisco. 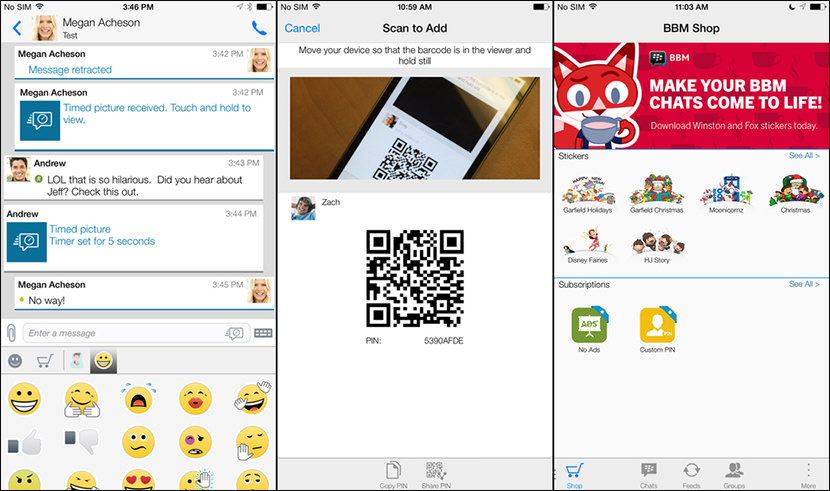 With BBM® what you share is always yours to control – even once it’s left on your phone. Download it for free on iOS®, Android™, Windows Phone® and BlackBerry®. BBM is wel known for its secure messages, unfortunately, with the introduction of the iPhone, BlackBerry died a slow death. I don’t see end to end strong encryption listed as a feature.

Without this feature, implemented properly where no one but sender and receiver have access to encryption keys, it is possible for the company behind BBM, hackers, government agencies and other third parties, to read/monitor/log the contents of users’ messages. Alternative messaging apps that feature end to end encryption include Threema, reTXT, and Bleep. There are others but they typically require your real phone number to register and full access to your entire contacts book. 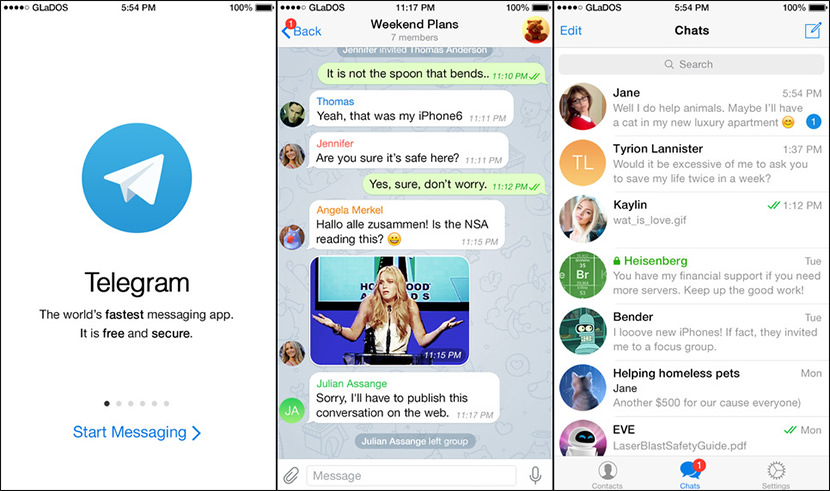 Telegram is a messaging app with a focus on speed and security. It’s superfast, simple, secure and free. Telegram seamlessly syncs across all of your devices and can be used on desktops, tablets and phones alike. You can send an unlimited amount of messages, photos, videos and files of any type (.doc, .zip, .pdf, etc.). Telegram groups and broadcast lists have up to 200 members. Be sure to check our website for a list of Telegram apps for all platforms. 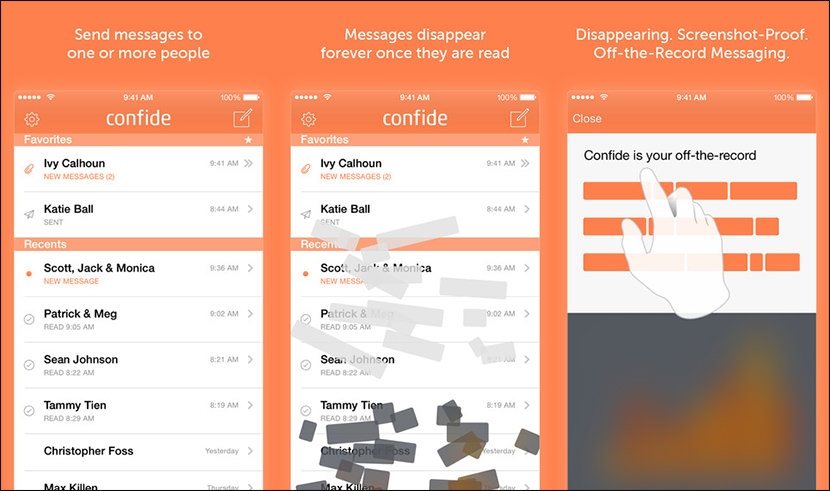 Confide is your off-the-record messenger. We combine end-to-end encryption with disappearing and screenshot-proof messages to foster private, unfiltered, and efficient communication. Backed by some of the best early-stage investors in the world, Confide has been featured in Fortune, Forbes, Bloomberg/BusinessWeek, NYT, Washington Post and more. And Confide has been used in over 180 countries worldwide crypto messenger. 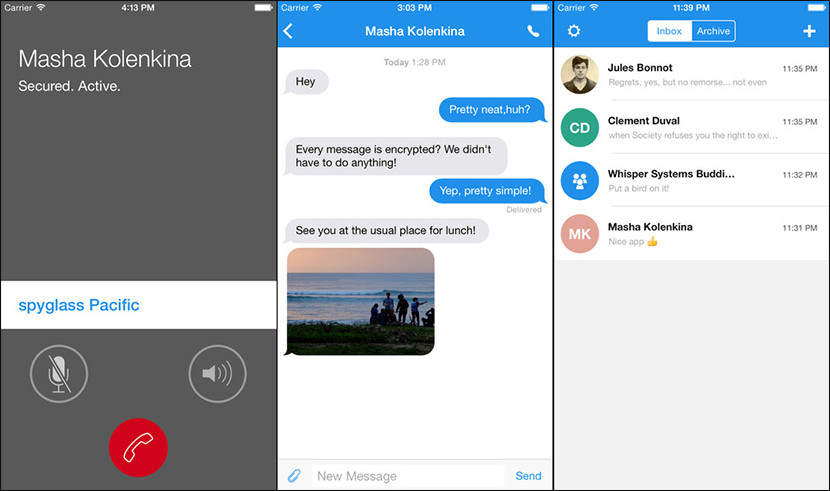 Privacy is possible, Signal makes it easy. Using Signal, you can communicate instantly while avoiding SMS fees, create groups so that you can chat in real time with all your friends at once, and share media or attachments all with complete privacy. The server never has access to any of your communication and never stores any of your data. 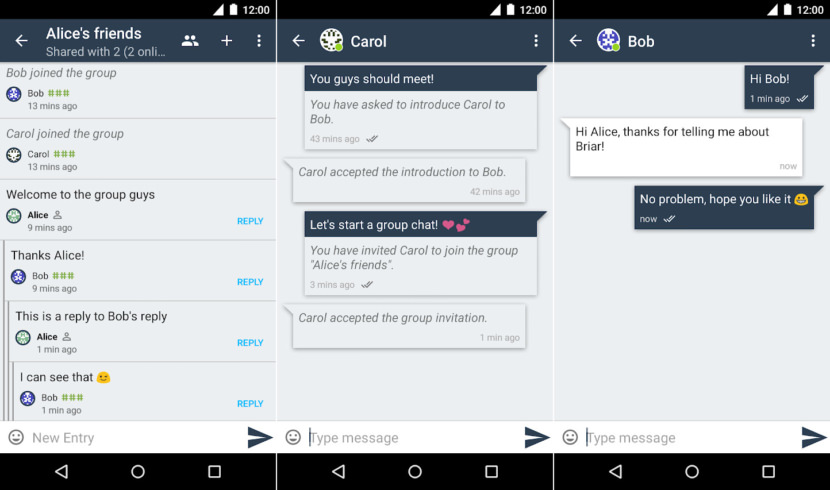 Briar is a messaging app designed for activists, journalists, and anyone else who needs a safe, easy and robust way to communicate. Unlike traditional messaging tools such as email, Twitter or Telegram, Briar doesn’t rely on a central server – messages are synchronized directly between the users’ devices. If the Internet’s down, Briar can sync via Bluetooth or Wi-Fi, keeping the information flowing in a crisis. If the Internet’s up, Briar can sync via the Tor network, protecting users and their relationships from surveillance. 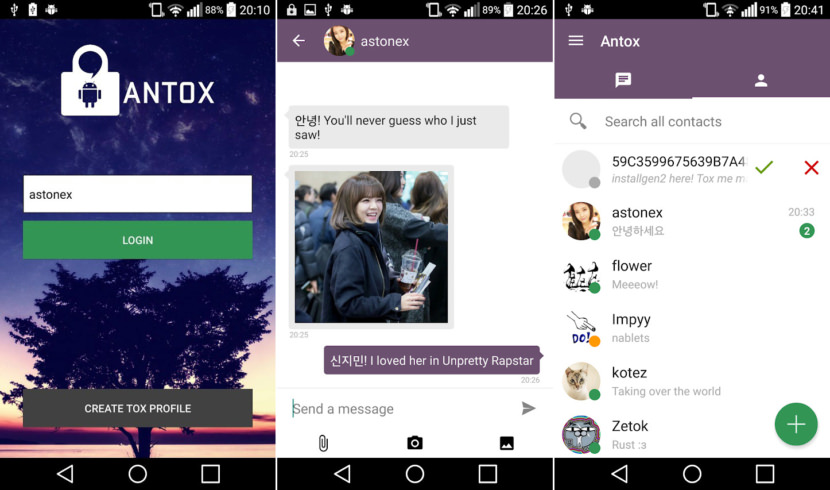 Whether it’s corporations or governments, digital surveillance today is widespread. Tox is easy-to-use software that connects you with friends and family without anyone else listening in. While other big-name services require you to pay for features, Tox is completely free and comes without advertising — forever.

Jami is a free and universal communication platform which preserves the user’s privacy and freedoms. Designed for the general public as well as the industry, Jami aims to provide all of its users a universal communication tool, free, secure and built on a distributed architecture requiring no authority nor central server to operate. 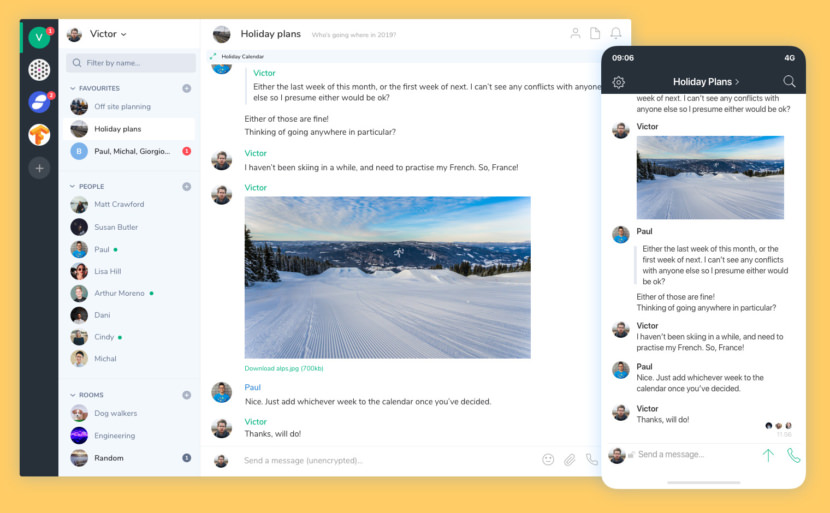 A chat app, under your control and entirely flexible. Riot lets you communicate the way you want. Made for [matrix] – the standard for open, decentralized communication. Get a free matrix.org account, get your own server at https://modular.im, or use another Matrix server. Riot is for everyone, from casual chat to high powered collaboration. 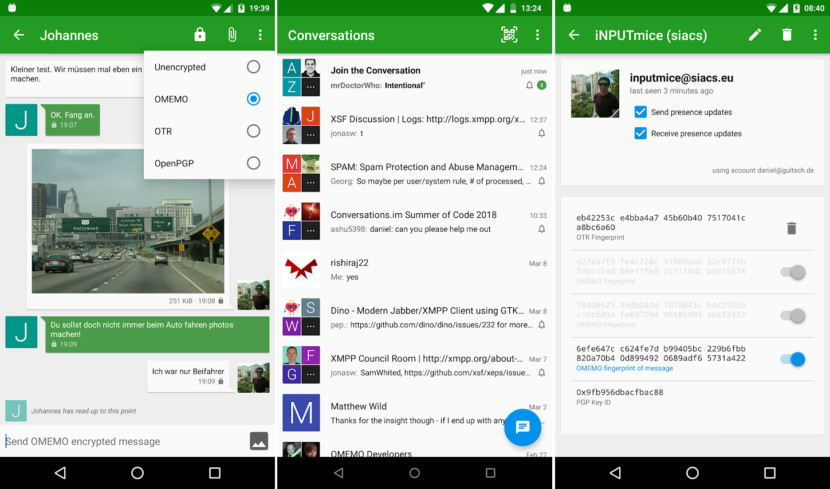 Utopia P2P Ecosystem. Utopia is a feature-rich platform that is specifically designed to protect privacy of communication, confidentiality, and security of personal data. Utopia is a decentralized network, with no central server involved in data transmission or storage. The network is supported by people who use its many high quality features. 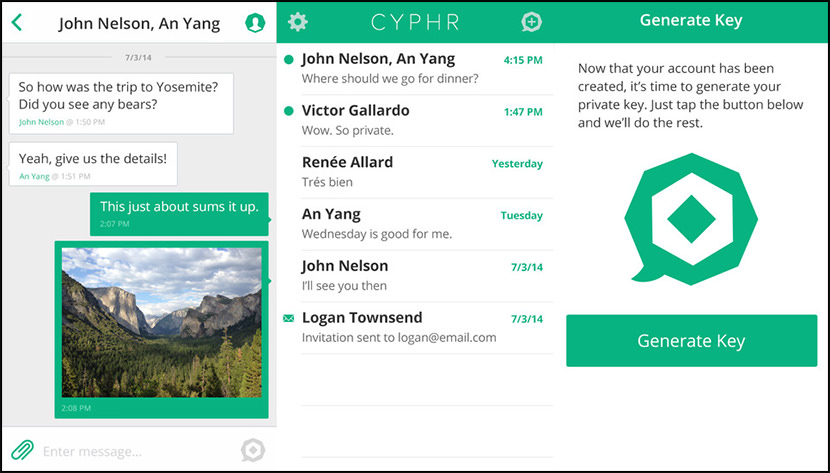 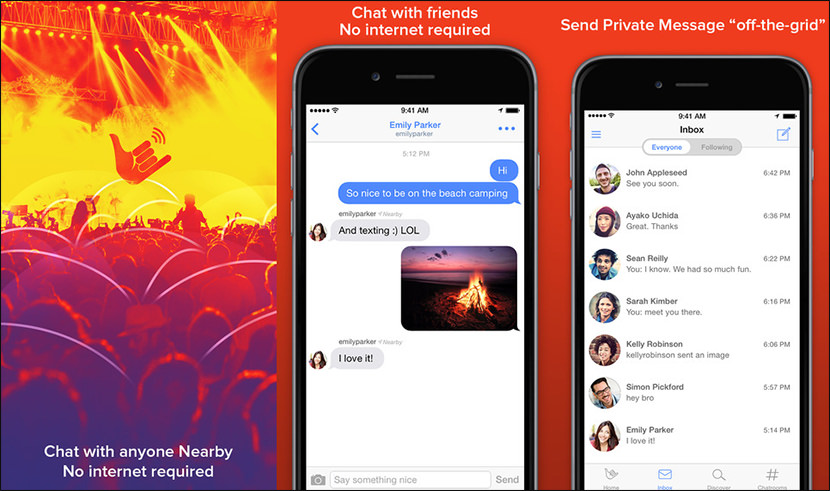 FireChat works even without an Internet connection or cellular phone coverage. Use it anywhere: planes, public transportation, cruise ships, campuses, and crowded events. All you need is a few people using FireChat. Free instant messaging. No network or data plan needed. Welcome to the Internet. You will be automatically connected directly with one another, creating your own network for public and private communications.

The more people use it, the bigger and faster your network becomes. And when you do have access to a reliable Internet connection or cellular network, FireChat helps you reach people worldwide and build your audience faster than on any social network, for free blockchain instant messaging.

Inside The NSA – Americas Cyber Secrets

Since its inception in 1952, the National Security Agency has been shrouded in secrecy; for years the White House denied its very existence. For the first time since 9/11 changed everything, cameras go beyond the closed doors of the NSA, deep inside the agency’s over 2 million square foot top-secret compound.

10 Free And The Best Password Manager For Windows 10, Mac, Android And iPhone