Which is the best 2D and 3D game engine? You might have heard the term again and again but never really knew what a ‘Game Engine’ is exactly. In short, a game engine is the architecture that developers use to run the game where the components developers use are reusable to build the framework of the game. This gives them more time to focus on the unique elements like character models, textures, how objects interact, etc.

If you’re looking for a really good and feature rich yet free game engines, here is a comprehensive list of the top game engines in the market to choose from based on need, most often rendering engines are built upon one or multiple rendering application programming interfaces (APIs), such as Direct3D, OpenGL, or Vulkan which provide a software abstraction of the graphics processing unit (GPU). 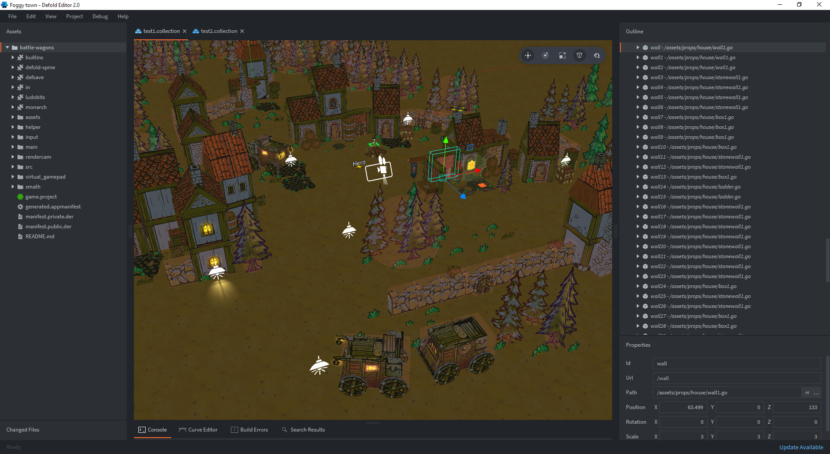 Defold is a completely free to use game engine for development of desktop, mobile and web games. There are no up-front costs, no licensing fees and no royalties. The source code is made available on GitHub with a developer-friendly license. The Defold editor runs on Windows, Linux and macOS and includes a code editor, debugger, profiler and advanced scene and UI editors. Game logic is written in Lua with the option to use native code to extend the engine with additional functionality. Defold is used by a growing number of developers to create commercial hits as well as games for game jams and in schools to teach game development. Defold is known for its ease of use and it is praised for its technical documentation and friendly community of developers. 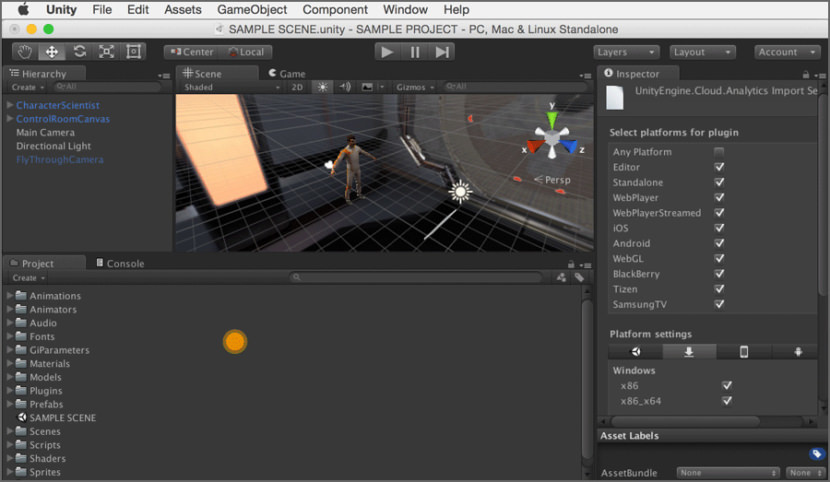 Unity is used to create half of the world’s games. Our real time platform, powered by tools and services, offer incredible possibilities for game developers, and creators across industries and applications. Unity is a multi-platform game development tool, designed from the start to ease creation. A fully integrated professional application, Unity offers the free Personal Edition with all features, a Plus subscription at 25$ a month and a Pro subscription at 125$ a month with extra services such as Cloud building. 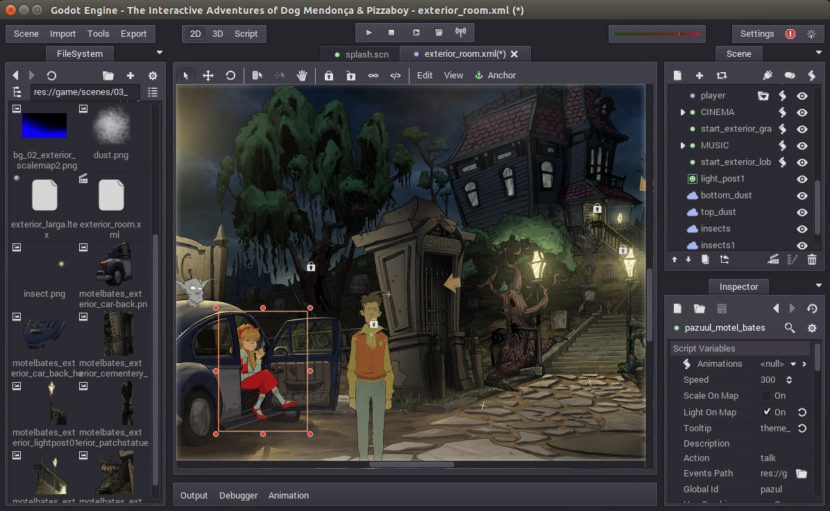 Godot provides a huge set of common tools, so you can just focus on making your game without reinventing the wheel. Godot is completely free and open-source under the very permissive MIT license. No strings attached, no royalties, nothing. Your game is yours, down to the last line of engine code. Godot comes with hundreds of built-in nodes that make game design a breeze. You can also create your own for custom behaviors, editors and much more. Works on Windows, OS X, Linux, FreeBSD, OpenBSD and Haiku. The editor runs in 32-bit and 64-bit, in all platforms. 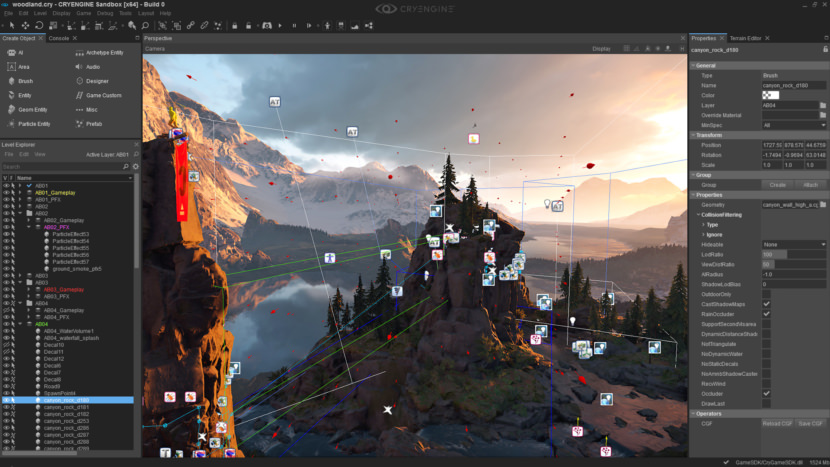 With CRYENGINE, they have a simple goal: to create the most powerful game engine in the industry, and to give creators all across the globe the tools to harness this power to create world-class gaming experiences, no matter their budget or team size. CRYENGINE makes the learning curve less steep with Full Source Code. Clear tutorials, detailed documentation, and a strong development community. The marketplace provides you with a wide range of assets ready to use in your projects. 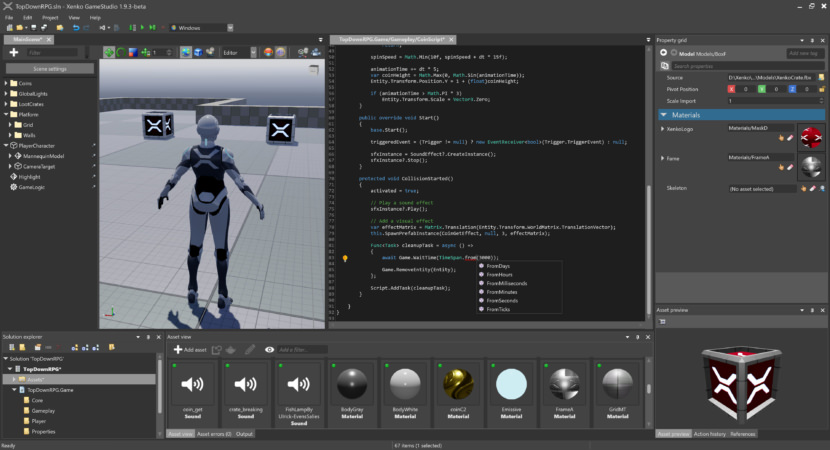 Xenko is an open-source C# game engine designed for the future of gaming. It comes with a full toolchain and is especially well suited to create realistic games but allows you much more! Xenko comes with a robust toolchain that enables you to intuitively and efficiently create, manage and modify all assets of your game. The suite of editors simplify and automate common development workflows. Its nested prefab and archetype systems scale along all editors and assets. Xenko Game Studio has also been designed so that it can be extended easily. A plug-in system to help users extend the Game Studio is coming soon!

Duality is a modular 2D game engine that provides its own visual editor. It’s highly extensible, written entirely in C# and backed by OpenGL. For a lot of game libraries, your code has the active role of setting everything up and managing it. These roles are reversed here: Your primary job is to define objects and specify their behaviours – Duality can handle all the rest. 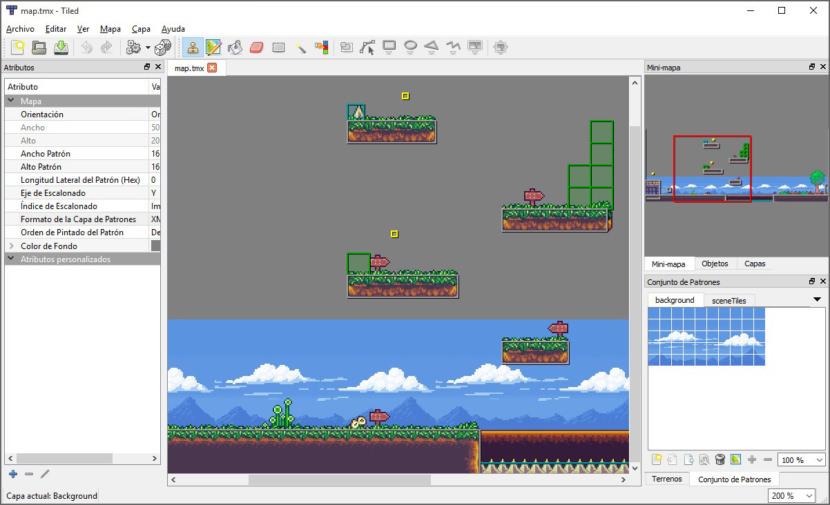 The unrivaled graphics development engine for business and industry. Build high-quality 3D and 2D solutions and deploy to any platform. Completely free. Evergine allows you to visualize big data on the big screen or on virtual/augmented reality headsets. Evergine is the first graphics engine focussed on industry 4.0, big data and continuous business scenarios giving you an efficient means to make better decisions by seeing the big picture behind the numbers.

Independently of the games physics of your choice –2D or 3D–, Evergine helps you managing your games assets using our integrated game editor with additional services, such as the end-users game analytics, online in-game advertising, in-app purchases, game notifications, social network gaming marketplace handling. Evergine is a C# component-based modern game engine which allows you to create cross-platform games and apps for many platforms. 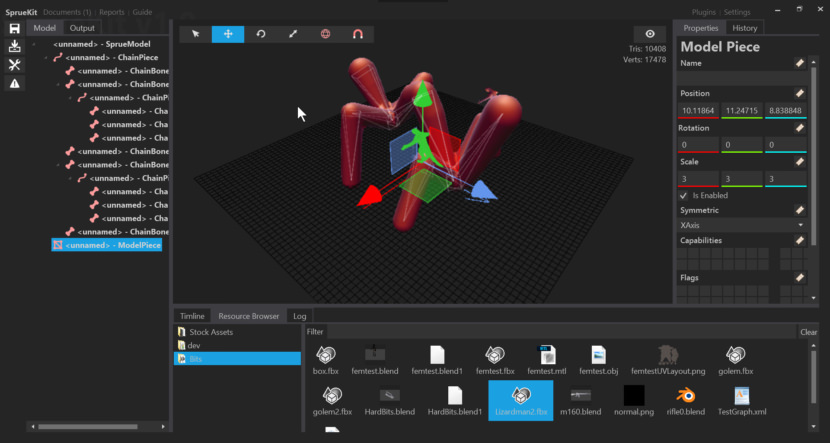 One framework for creating powerful cross-platform games. The spiritual successor to XNA with 1000’s of titles shipped across desktop, mobile, and console platforms. MonoGame is a fully managed .NET open source game framework without any black boxes. Create, develop and distribute your games your way. The goal is to allow XNA developers on Xbox 360, Windows and Windows Phone to port their games to the iOS, Raspberry PI, and PlayStation 4 platforms is currently in progress. 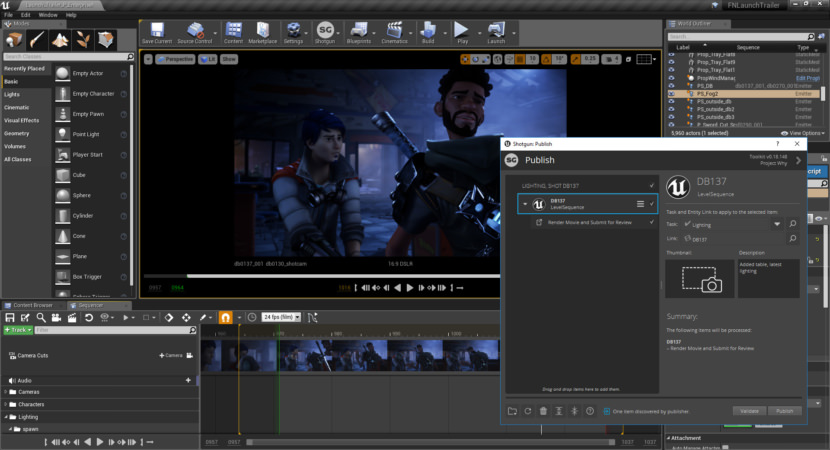 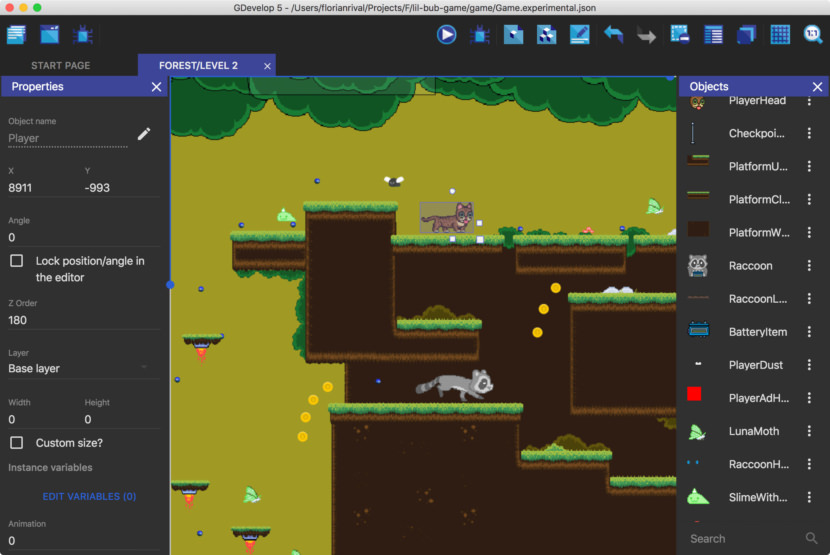 GDevelop is an open-source, cross-platform game creator designed to be used by everyone – no programming skills required. Unleash your creativity with GDevelop and create any kind of game: platformers, puzzles, shoot ’em up, strategy, 8-bit games… Go through the examples or start a new project from scratch. With GDevelop, you can make simple projects for fun or create ambitious indie games like Lil BUB’s HELLO EARTH, Hyperspace Dogfights and tons of other games! 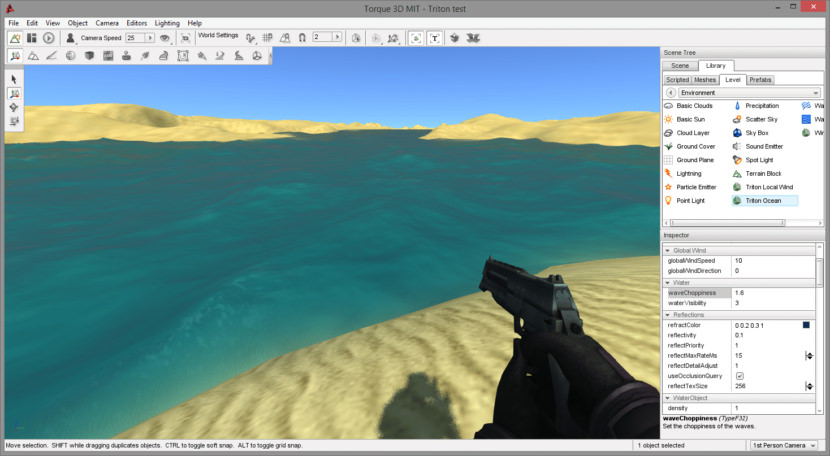 Torque 3D is the best full source, open source solution available. It is also our flagship engine built on the core strengths of our Front Line Award-winning Torque Game Engine Advanced. Torque 3D has been re-architected for maximum flexibility and performance across a wide-range of hardware. Torque 3D comes equipped with a full suite of tools to allow your team to excel and produce high-quality games and simulations. Torque 3D supports Windows and Browser-based web deployment out of the box. 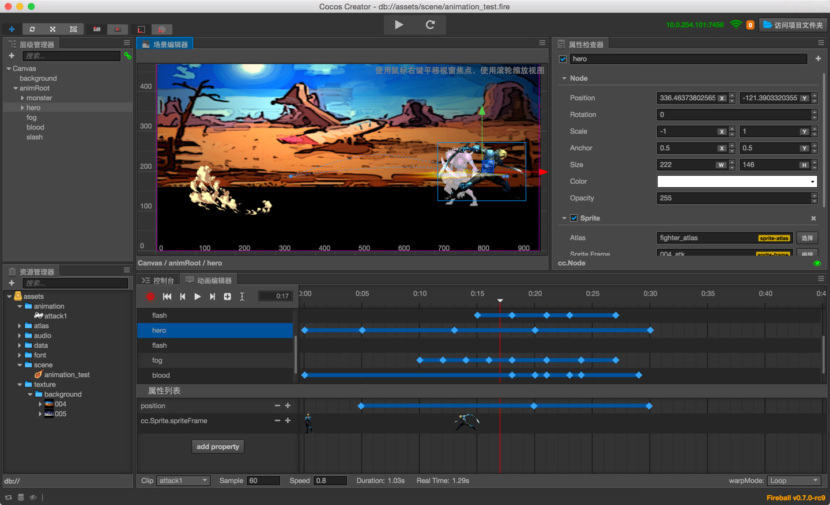 Cocos2d-x is an open-source game framework written in C++, with a thin platform dependent layer. It is widely used to build games, apps and other cross platform GUI based interactive programs. There are also JavaScript and Lua bindings included! cocos2d-x is a cross platform open source free 2D game engine for mobile gamedev, that is fast and stable, easy to learn and use. 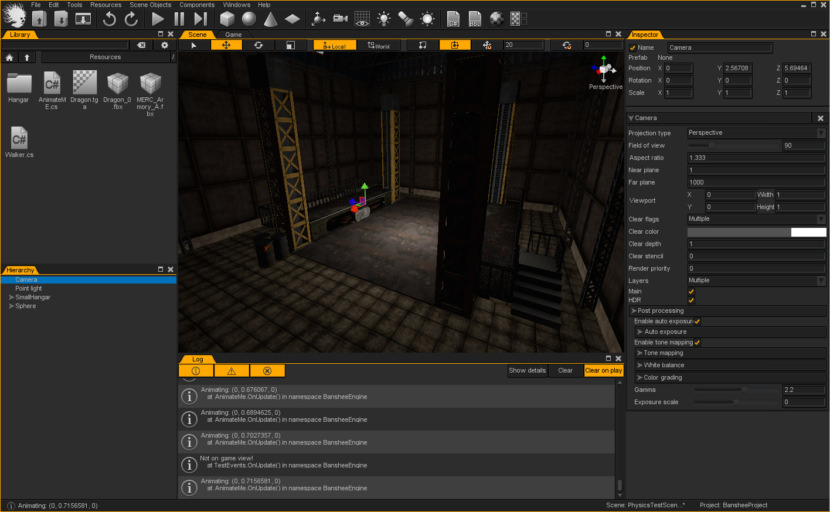 Supports import of most common file formats and comes with a powerful yet easy to use editor. High fidelity graphics using a physically based renderer with support for HDR and gamma correct rendering, running on DirectX, OpenGL or Vulkan. Optimized core with support for multi-threaded rendering, animation, audio and physics in order to ensure best performance.