There is a saying, if you pay peanuts, you get monkeys. Just like everyday consumer goods, the cheaper it is, the lower the quality. Some may argue Google Android phones offer better specification than Apple yet retain the same quality. Just look around, have you seen any android phone older than 4 years? Apple smartphones on the other hand last longer as they are built with higher quality with the goal of making money via their subscription fees.

It is hard to compare a product based on their specification alone. For instance, an iPhone’s 3000 mAh battery does not have the same quality as an Android 3000 mAh battery. The material may differ, so does the number of rechargeable cycles. The only way to know the overall product quality is to look at the average failure rate against similar competitors within the same industry.

1 – Brands percentage share of calls into RESCUECOM 1-800-RESCUE-PC call center
2 – Calculate percent of computers released on the market against the number of repair calls per brand.
3 – Assigned by RESCUECOM to simplify the reliability scoring system.

Samsung close behind Apple in RESCUECOM 2018 Computer Reliability Report. Milman is head of RESCUECOM, the industry leader in computer repair, which regularly provides data on their service records to give consumers information on which computers are the most reliable.

The market for computers is shrinking due to computing alternatives like tablets and phones. To be successful, manufacturers are going to have to spend more on research and development and rely less on older designs that worked years ago, but are not well suited to today’s very complex operating systems. 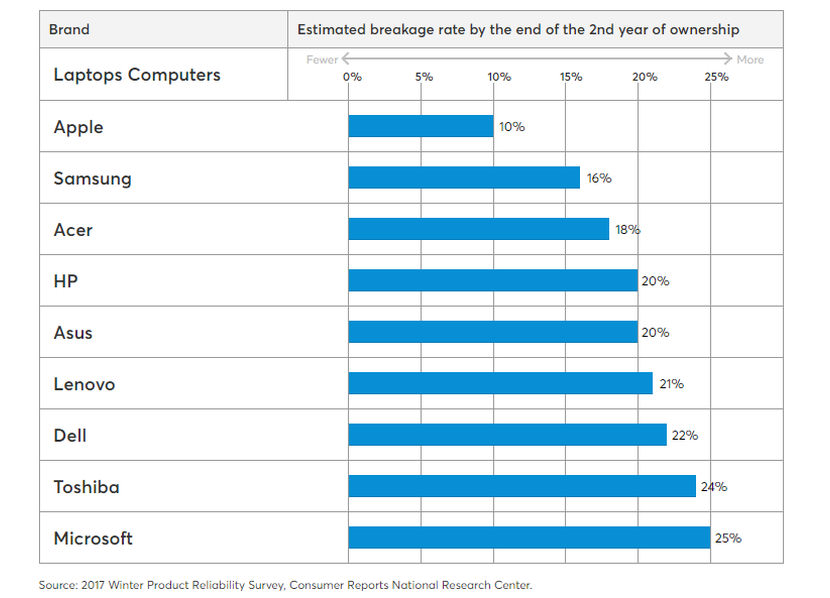 Missing in the list are sub brands or smaller brands such as Razer, Alienware, Predator etc. These brands tend to have higher reliability than their parent companies’ products. Thus, gaming laptops are worth the price for their reliability, but in terms of performance, they are overkill for daily tasks such as surfing the web, word processing and photoshopping. 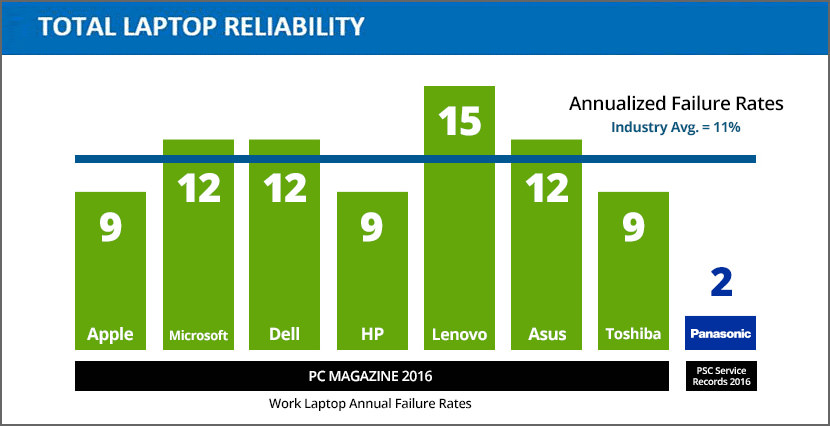 Laptop reliability by manufacturer. They next turn their attention to the relative reliability of different laptop manufacturers. Their study data includes 9 brands with a minimum of 1000 units, which is enough to give us a statistically significant look at the 2 year failure rates. Figure shows the 3 year forecasted malfunction rates for the 9 brands (excluding accidental damage): 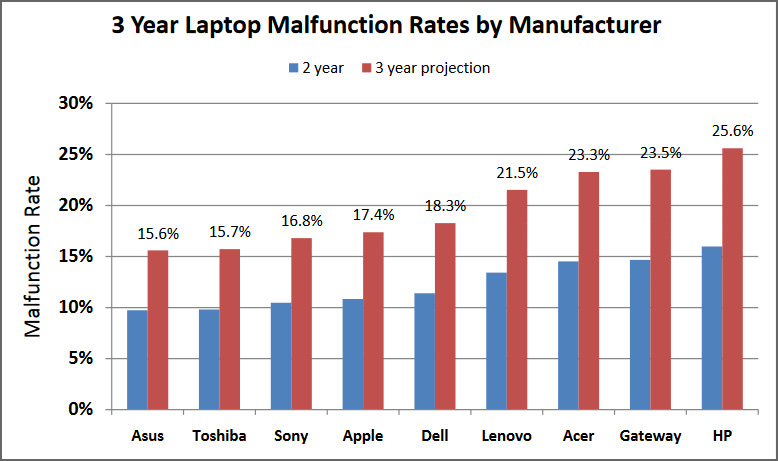 ASUS and Toshiba come out on top. With 3 year malfunction rates forecast to be under 16%, laptops from these two manufacturers are nearly 40% more reliable than Hewlett-Packard, the worst performer in our study. Sony and Apple also performed better than the average. The industry leader HP, which shipped nearly 16 million laptops in the past year according to IDCiii, ranked dead last in our reliability study with over one-fourth of laptops expected to malfunction in 3 years. Gateway and Acer, the #2 makers of laptops were also nearly as unreliable as HP, with an expected malfunction rate of over 23%.

05 – Computers And Laptops After Sales Service

Apart from reliability, the after sales service is equally important too. I’ve owned a great number of computer brands, such as Acer, Asus, Dell, and Sony. My Dell PC failed during the first year and Dell immediately replaced the part, no question asked. Sony did the same thing too when the hard disk failed. My Acer laptop died in the 3rd year, right after the warranty expires.

Planned obsolescence, or built-in obsolescence, in industrial design and economics is a policy of planning or designing a product with an artificially limited useful life, so it will become obsolete (that is, unfashionable or no longer functional) after a certain period of time.

No company will admit they have this policy, but we can observe this from a products’ average failure rate and the company’s sincerity in fixing it by making available parts required to fix it. This is why I am a huge fan of Japanese products and also Apple. Products are not merely hardware, Apple on the other hand is known for updating their 4 or 5 years old iPhone with the latest OS. As for parts, it is easy to find spare parts for most Japanese brands.